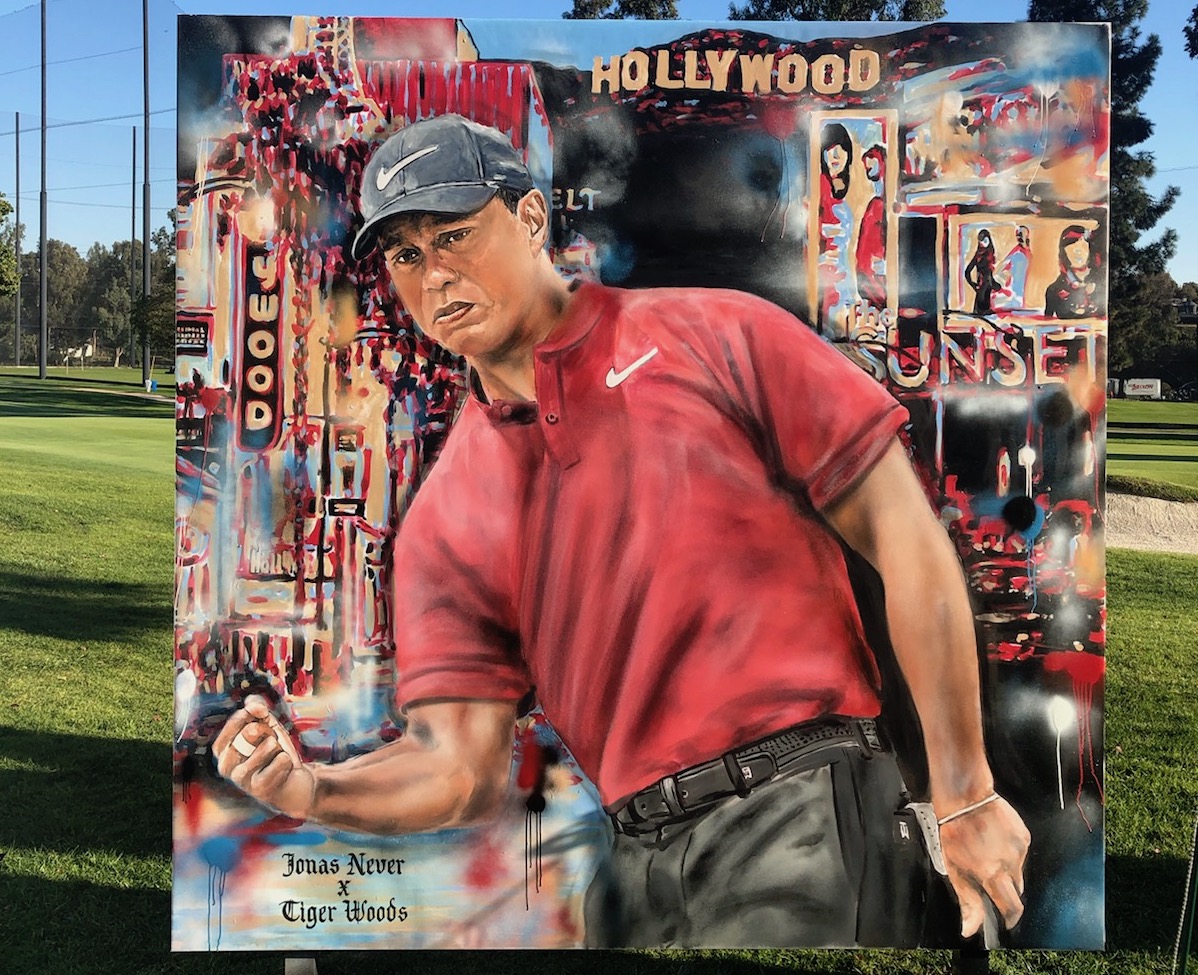 The mural at the tournament in Pacific Palisades, California features a large Tiger Woods, just the latest athlete to receive Never’s painted treatment.

His mural counts are likely well above 200, but Never lost track somewhere after 100. He commissioned two pieces for the Genesis open on behalf of TGR Live, a Tiger Woods venture that puts on premium events.

Never first started getting attention from teams when he painted a mural following the death of ESPN anchor Stuart Scott. As a longtime bartender, Never watched a lot of “SportsCenter” and felt as though he knew Scott. The mural caught the attention of ESPN, which realized much of his work involved athletes and began to feature him.

As that happened, more teams began reaching out wanting to work with him. When he started out, he never imagined murals would be a way to make a name for himself, a living or get him on “SportsCenter.”

“Not in a million years,” he said. “I played baseball in college. I thought if I ever got on ESPN it’d be for pitching, not painting.”

Los Angeles teams took notice because he’s done so many in his hometown, a place that’s been appreciative of his art for a long time.

He began painting murals before spray paint was deemed an appropriate form of art and people were still apprehensive to the medium. To help combat the stigma, he began painting subjects affiliated with where people lived and that navigated to movies, pop culture and eventually sports.

“I noticed how much people took to it and really honed it from there,” Never said.

His work does draw up a lot of emotions; more often than not, the emotions are harmless. He knows most of his paintings won’t last forever and everyday wear and tear will take their toll. A major piece he did of LeBron James, however, was vandalized twice.

“The hate and love he brought was incredible,” Never said. “The way public art can affect people is incredible, and now it’s not just in-person but seeing it on Instagram or TV. People are flying to see it.”

Some of Never’s work is spontaneous. He started the James mural a few days after he signed with the Lakers and finished in less than two days. Other times, his work can take longer from concept to wall. His longest project took three months in Venice Beach.

He also likes to balance between paid work and his own artistic mind. He tries to keep Sundays free for himself, as working seven days in a row on a piece can be exhausting.

“Maintaining the quality of work is hard,” he said. “So, fresh eyes can help the maintain passion and sanity.”

Deciding on what to paint can be difficult. He needs to be sensitive to how athlete current events could alter how a painting is perceived in the public. Instead, he likes to paint lasting moments, like Kirk Gibson’s home run in the 1988 World Series for the Dodgers or lengthy careers like Kobe Bryant.

READ MORE: Meet the New Creative Team for the Alliance of American Football

He gets geeked when athletes like Dodgers outfielder Justin Turner or Lakers guard Lonzo Ball visit his work, but also other celebrities, like Ralph Macchio visiting his “Karate Kid” mural.

While an overwhelming majority of his paintings have been in the Los Angeles area, he has made his way to a few other destinations such as Boston, Detroit, and Colorado. He loves the pride and the number of subjects in Los Angeles, but he wants to start murals in more places across the globe. One specific project he has in mind involves Odell Beckham Jr. in New Jersey.

“Los Angeles has perfect weather and it never rains,” he said. “I love when I can go to dinner and have pride in something I pass, but I don’t want to saturate the market either, and I’d love to explore other teams and cities.”