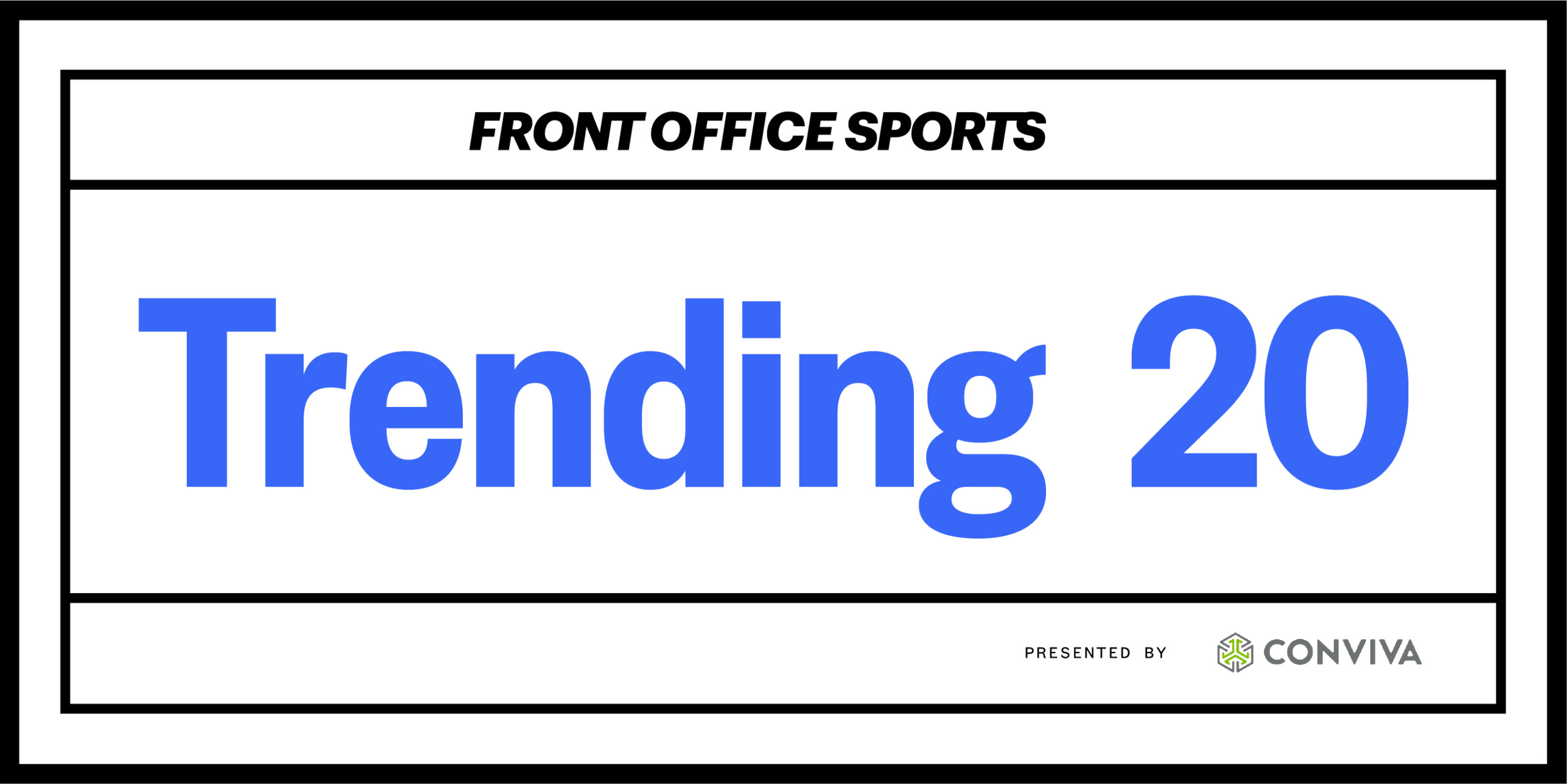 Welcome to the FOS Trending 20, presented by Conviva Social Insights

PLEASE NOTE: THIS IS AN ARCHIVED VERSION OF TRENDING 20 FROM OCTOBER 2020. SEE THIS WEEK’S EDITION. This new collaboration between Front Office Sports and Conviva ranks the pro teams and leagues/events which are driving the deepest cross-platform engagement across social platforms (Instagram, Twitter, YouTube, Facebook). Published every Tuesday morning, this leaderboard draws data from the prior Monday through Sunday. This page — updated weekly — contains two leaderboards; first, the Top 20 professional teams, ranked by cross-platform engagement rate, and then below it, the Top 20 leagues/events/properties, also ranked by cross-platform engagement rate. For more on the methodology and criteria on Trending 20, please visit our explainer section below the two leaderboards. All data is sourced using Conviva Social Insights, a social analytics platform for brands, media, entertainment and sports organizations worldwide. For additional context and information on this week’s leaderboard, please see the “Notes” sections below each leaderboard. Skip to this week’s Trending 20 leaderboards…

The Trending 20 is updated every Tuesday morning, reflecting data from the prior week (Monday-Sunday).

The 20 pro teams with the highest cross-platform engagement rate from October 26th-Nov 1st, 2020.

NWSL Expansion Dominance After falling short of the minimum post criteria the past two weeks, Racing Louisville FC increased its content output and took the top spot in this week’s Trending 20, seizing the throne from fellow NWSL expansion brand Angel City FC. As the league grows and capitalizes on its fervent fanbase, NWSL teams have become a mainstay in our Trending 20 leaderboard. The Arrival The Dallas Stars broke into the top 20 this week as they revealed their new blackout jersey that paid homage to the legendary downtown Dallas Skyline. It is the first time since 2006 that the Stars will enter a new season with three uniform options. Patterns Emerging After taking 10 of the 20 spots in last week’s Trending 20, NWSL and MLB clubs further asserted their presence in the rankings this week, taking 14 of the 20 spots in the Trending 20 (Teams) leaderboard. As the season ended for both leagues, a mix of season-ending posts (the Dodgers’ World Series victory counted in this week’s rankings) and major trades + offseason moves led to high engagement rates across the board. A whopping 12 (twelve) teams saw their total cross-platform audience grow 1-percent or more in the past week, eight of which were NWSL clubs… Racing Louisville FC (6.4%), Portland Thorns (6.0%), Chicago Red Stars (4.8%), Houston Dash (4.5%), OL Reign (3.8%), Washington Spirit (3.6%), LA Dodgers (2.6%), AS Monaco (1.4%), NC Courage (1.3%), Wolverhampton (1.2%), Angel City FC (1.2%), Tampa Bay Rays (1.0%) — *The minimum for Trending 20 consideration is 20 posts in the prior week. This week, 16 of 274 tracked pro teams were ineligible for Trending 20 due to a lack of posts.

The 20 professional leagues and events with the highest cross-platform engagement rate from October 26th-Nov 1st, 2020.

A New Champion After two weeks in the Top 3 without capturing the top spot, KBO has taken the throne in this week’s Trending 20 as the league prepares for its playoffs. Buoyed by American interest due to its new broadcast contract with ESPN, the bat-flip-friendly KBO has been a hit on social this season, and takes over the top spot in our leagues/events Trending 20 heading into the most exciting few weeks of its season. LoL – A New Normal The 2020 League of Legends World Championship came to an end on Saturday driving a big audience growth for the league (slotting in at #3 this week). Over the past week, the league’s audience grew by 66,044 members, showcasing the growth esports leagues are experiencing amidst the pandemic. While teams based in large cities are struggling to reach fans without live attendance, esports properties continue to grow. High-Growth Properties Last week, the Trending 20 properties also doubled as the fastest-growing audience in sports. This week, a few of those properties continued to see growth while seeing significant drops in engagement rate. Copa Sudamericana led the pack growing their audience by more than 2% this week, while combat sport properties UFC (and UFC Europe) and ONE Championship slotted growth rates near 2-percent. And despite its low engagement rate, Ligue 1 (France) turned in a one-percent growth rate this week. —

*The minimum for Trending 20 consideration is 20 posts in the prior week. This week, 19 of 100 tracked leagues/events were ineligible for Trending 20 due to a lack of posts.

Q: How do we determine and rank the Trending 20 accounts? A: Trending 20 accounts are ranked based on cross-platform engagement rate, and all data is sourced from the Conviva Social Insights leaderboard platform. Q: What platforms are included in the “cross-platform” engagement rate? A: The four platforms included are Facebook, YouTube, Instagram and Twitter. Q: What is “engagement rate” anyway? How is it calculated? A: The engagement rate shown is the average engagement rate for all posts during the set period. Engagement rate per post is calculated by the total number of engagements divided by audience, expressed as a percentage. Q: My team/brand account had a higher engagement rate than others on this list, but we’re not included. What gives? A: Sorry about that! In this case, your account either did not meet the minimum 20-post threshold for eligibility, or the account is not included in our current list of eligible teams/properties. Q: Will more teams/leagues be added to the list of eligible accounts? How can I request to have my team or league added? A: Yes, we will continue to add teams from more professional leagues, as well as potentially adding additional or emergent leagues or event properties. Please request an addition by emailing Edgar Walker ([email protected]) or tweeting our FOS Insights department @FOSInsights. Q: Will you be ranking collegiate programs, as well? A: This one is a bit tricky — some athletic programs house all their posts from one central account while others have dedicated team accounts — but we are actively seeking out the best course of action to rank collegiate programs by the same methodology as professional teams. Q: How can I see more similar data and go deeper than the Trending 20? A: Conviva has an extensive, curated database of sports teams, athletes, leagues, and brands. As you’ve registered for access for the Trending 20, Conviva may reach out with information on their product. For more detailed leaderboard listings or to request a free trial, visit the Conviva website. If you have any additional questions about the methodology or data utilized for the Trending 20, please contact [email protected] or tweet our FOS Insights department @FOSInsights.