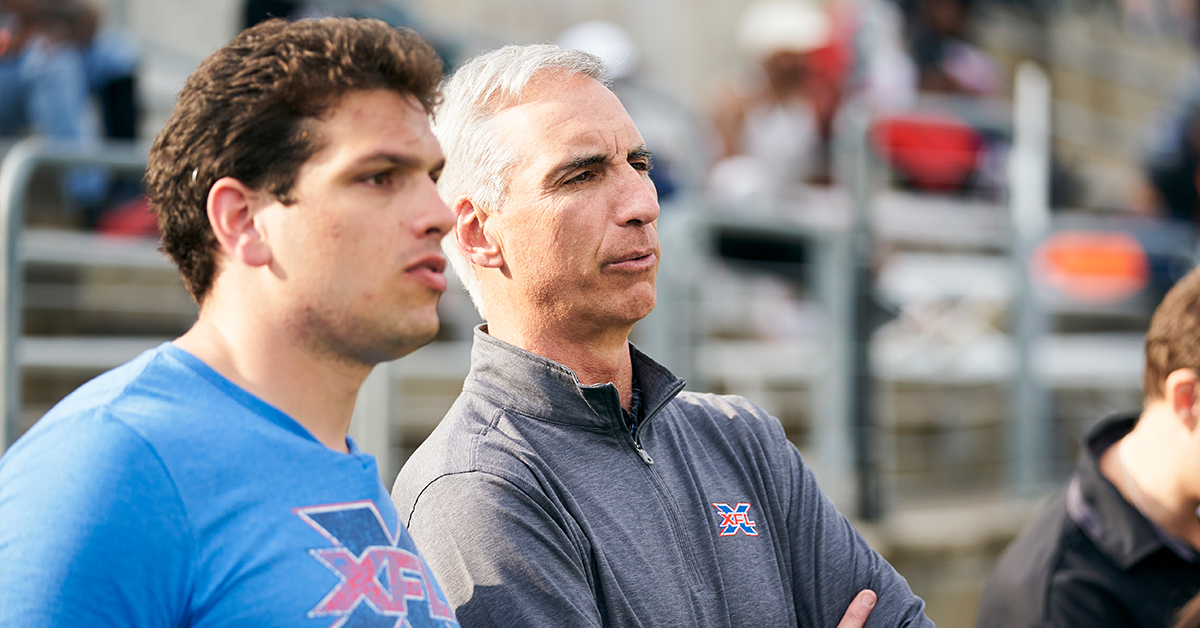 Last year, Vince McMahon sold over three million shares of his WWE wrestling empire, freeing up around $270 million to help fund his new football league, a revival of the XFL. The idea raised eyebrows for several reasons, not the least of which was a doggedness to make spring football succeed after so many other attempts, including one of McMahon’s own, already failed.

All the while, the XFL has bided its time in preparation for its own 2020 launch.

“I take the interest that exists right now in spring football in terms of launching leagues as a positive,” XFL Commissioner Oliver Luck told Front Office Sports in February at the introduction of the Washington, DC franchise. “I think it’s sort of an affirmation of what we’re all seeing together, which is football being the No. 1 most popular sport and the other being some business opportunities in the spring.”

That crowded field is a little bit thinner following the AAF’s decision to file for Chapter 7 bankruptcy. Reportedly, the league reached out to the XFL about a merger, but ended up folding.

“There’s no dancing on the grave of the AAF,” Luck told NJ.com. “We watched them, we’re going to take lessons from them. To a certain degree, it’s a cautionary tale.”

To that end, the XFL is confident it’s in an entirely different position from the AAF.

Unlike the first time around, McMahon has invested in football infrastructure. The league has already filled six of its eight coaching vacancies and brought in steady hands like Luck, who previously served as the NCAA’s executive vice president for regulatory affairs, and Doug Whaley, the former Buffalo Bills general manager who now heads up the XFL’s football operations. Those are the sorts of voices pushing steady growth over short-term splashes, such as a recent decision to delay a planned wave of player signings in the first quarter of this year. The AAF shutdown may have helped usher that decision along.

“We’re going to push that back because of the developments of everything that’s been going on, not only with the XFL,” Whaley told Front Office Sports. “Because we think we have a better chance to add to that number of players and that quality of players if we hold off on the recruiting process and start that a little later.”

The XFL is also taking the opposite tack from the AAF in location. While the AAF mostly fielded teams in non-NFL markets, all but one XFL team will be in a city that already has an NFL franchise — and that one exception, St. Louis, hosted the Rams until the team’s move to Los Angeles in 2016.

With higher quarterback salaries, a presence in major markets and several new stadiums and a player- and coach-friendly approach, the XFL is hoping for the product on the field to offer an exciting new brand of football that is still attractive to hardcore fans of the sport.

The other ingredient XFL 2.0 has that the AAF didn’t is time. The XFL is using that longer runway to build out the rules of its game in a way that is more befitting a software company than a football league.

“The methodology is you ask customers what they want. You ask experts how to build it. You identify research and data about how you would fix it. And then ultimately, you build, test, repeat: The Lean Startup method,” Sam Schwartzstein, XFL Director of Football Operations, told Front Office Sports. “So we’re using the same thing but we’re applying it to football.”

If it sounds like Silicon Valley language, that’s because it is. Schwartzstein played football at Stanford, where he earned two degrees and captained a Rose Bowl- and Pac-12 championship-winning team in 2012. After his football career ended, Schwartzstein spent five years at Chegg, an education technology company based in Santa Clara, prior to Luck hiring him as the XFL’s first product manager.

“There’s an evolution of football that might need to take place with some of the more old school techniques,” Schwartzstein said.

His process started with a survey of football fans, seeking to identify potential changes they might want. They had their first chance to take those ideas to the field in Mississippi in December, with junior college players going half-speed. They went back to the lab in February, where they tested situational work and skills-based drills with professional-caliber players.

They just wrapped up a third testing session at The Spring League in Austin, Texas, where teams played four full games and had 12 practices. It gave them plenty of material to chew on, which has proved invaluable as they look to create an evolved-yet-familiar version of the game.

“That was the main focus is to thoroughly test everything, because we don’t have to change anything about football,” Whaley said. “It’s a pretty great game as it is. But if we were to change something we wanted to make sure it’s thoroughly vetted both from experts, from data, and as well as being able to test live.”

The league will be announcing its two broadcast partners within the next few weeks. Both were present at The Spring League to aid in the development of the at-home viewing experience.

“We also had a little bit of a tech science fair down there,” Schwartzstein said. “We want to make sure that we’re understanding exactly how we can put the best product on the field from a technology standpoint, so there were about 10 vendors down there that showcased player tracking as well as identifying how do we find the right talent pool, so unique ways to find the best talent using data.”

It will be a delicate balance to make changes to a game to a game so loved and revered, and so resistant to change. Not everyone is optimistic that overhaul will succeed, either.

READ MORE: Trio of NFL Players Work Together for A Dunkin’ Retirement

“The likely demise of the AAF doesn’t bode well for the XFL,” Daniel Durbin, director of the Institute of Sports, Media and Society at the University of Southern California told the Stamford Advocate. “McMahon may have more resources available than the AAF did. But, in the end, he will have to be willing to wait out possibly years of losses to develop a stable and successful league.”

Nevertheless, the XFL believes its football product will be a major differentiator.

“The biggest thing we always wanted to make sure of was to have tweaks that are simple and interesting, but as soon as someone turned on our game, they knew it was football,” Schwartzstein said. “Let’s start small, but let’s focus on things that make the game more exciting, faster pace of game, and evolve like the way people are starting to consume their sports and entertainment.”