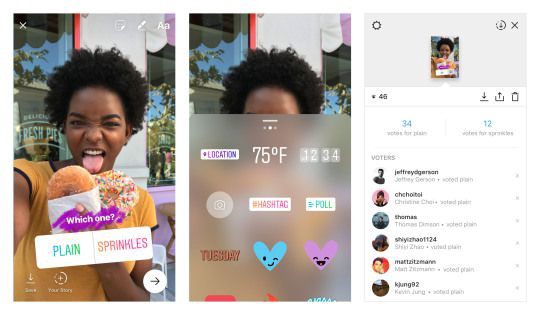 The feature could be a game changer.

On Tuesday, Instagram announced the edition of two new features to be utilized within Stories. The first was an eyedropper tool, similar to what is used in applications like Photoshop, that allows users to duplicate the color of an object in the photo. It’s the other feature in this update that already has marketers brainstorming new ways to boost engagement.

This includes a new sticker that lets the creator add a poll to the image. Viewers of the story then tap the side of the sticker indicating their choice. Creators can then open the viewers tab to see total votes in the poll along with which specific viewers voted for which option.

There’s absolutely potential for this to be used in a number of interactive promotions across sport. We heard some ideas from a few sport industry professionals and though that we would chime in with a few of our own as well.

The Instagram story is quickly becoming a one-stop location for fans to see the latest and greatest from their favorite teams and brands. As Keith Stoeckeler, VP of Digital at MKTG, told us, “the story is the new website.”

A prime example of this is shopping for merchandise. Fans can check out a team’s Instagram to see the latest and greatest gear available for purchase. Imagine this: you have a piece of merchandise, let’s say a hat, available in two different color ways. You then encourage fans to vote on their favorite color way via a poll in the Instagram story and turn it into a giveaway.

This next one is a simple idea, but it could be a very simple way to boost Instagram engagements during a game or event.

Imagine your team is hosting a tribute night to a beloved local musician. For this example, let’s say the Bowling Green Hot Rods are hosting Cage the Elephant night. The marketing team will have designated breaks between innings where they plan to play songs from the band’s discography. The marketing team can them prompt fans via the video board and public address (as well as their other social platforms) to vote between two songs before each break. The result of that poll will then determine which of the songs will get played at the next break.

The same principle could be applied to the mini games that you see contestants play between innings. Fans could vote up to a certain point in the game on which one they would like to see played: a water balloon toss or a relay race for example.

3. Choose Your Own Adventure Videos

I can’t take full credit for this idea. Something similar has been utilized on Twitter in the past, notably by the Sacramento Kings. The Kings posed a basketball scenario and, using Twitter polls, allowed the audience to decide how the possession unfolded. (Author Nika Harper also does some creative things with this concept if you’re looking for inspiration.)

With Instagram stories, the poll sticker now enables brands to tell a full fledged story in the same vein using video content. A brand or team can shoot and produce a skit or a commercial of some type and divide it into chunks small enough to fit into separate parts of an Instagram story. At certain points, the sticker poll could then be utilized to ask the audience where they would like to see the sequence of events of events being depicted go.

Say you have a person walking down a hallway and they can then enter a door on the left or a door on the right. The audience then votes which door to proceed through and the story carries on in a similar manner. The marketing team can then shoot enough content to make sure that all possible event sequences for the story are covered and only post the videos the audience has determined that they want to see.

What other ways can you see this new addition to Instagram being utilized? Let us know on Twitter @frntofficesport.