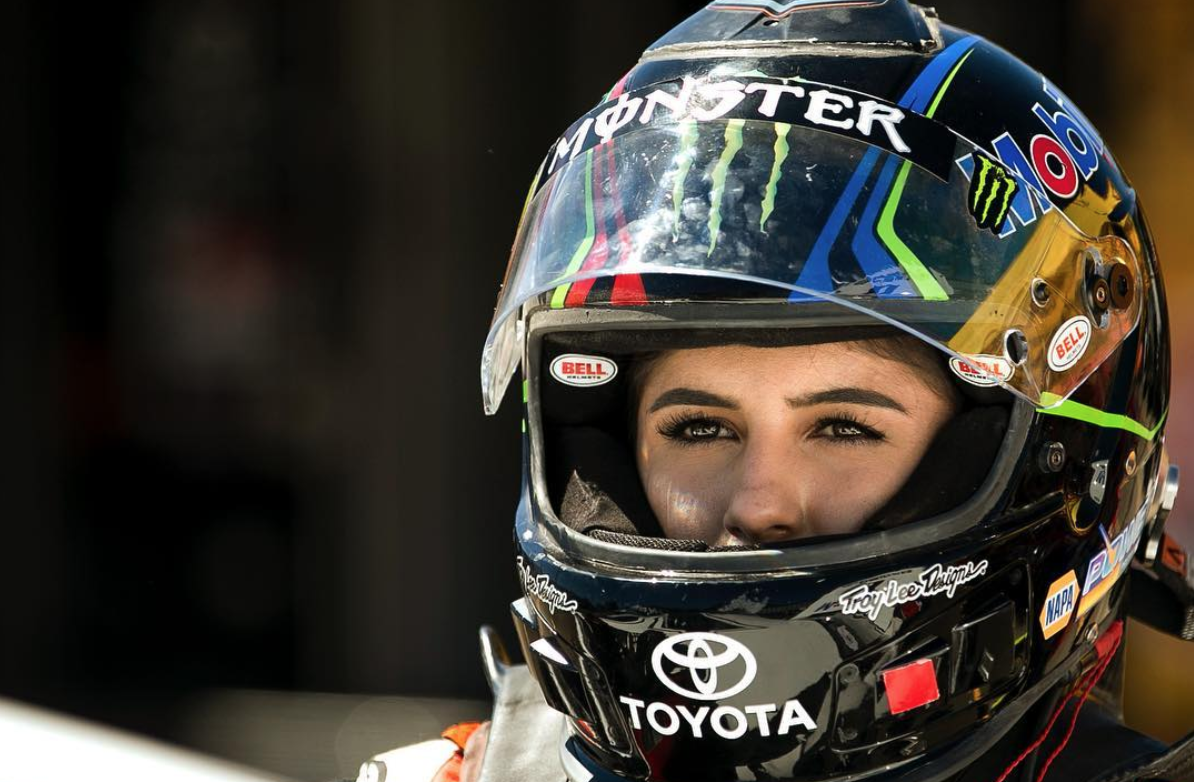 Deegan has deals with brands like Toyota, Under Armour, and Monster (Image via hailiedeegan/IG)

On September 29, the smile on Hailie Deegan’s face said it all.

When she climbed from her No. 16 Toyota, she had become the first female to win in K&N Series history. Now, ask her about her future plans — and it’s clear she doesn’t plan to stop racing anytime soon. The 17-year-old doesn’t just want to be the best female driver. She wants to be the best. Period.

Deegan won in a big way at Meridian Speedway, taking the lead from Bill McNally Racing teammate Cole Rouse on the last lap. When asked how badly she wanted to dominate, the budding superstar paused for a moment and said “dramatically” with laughter in her voice.

“I think it’s cool to win the way I did,” said Deegan. “We won in dramatic fashion. I mean, to be dominant is cool, but it’s always fun to be able to win the way I did. We had to work for it. It was a team effort. I kept getting mired back in traffic because of being stuck on the bottom. We had to work our way to the front, and when we did, we did what it took to win.”

But it wasn’t just a simple pass for the win. She had to put everything aside – team alliance, friendships and all – and got Rouse loose so that she could take the checkered flag.

“Before taking the white flag, I knew I had to make a move to get the win. We executed and did what we planned. We needed to show people that we’re out there to be the best, and we did that by securing our first win. It’s still fun soaking it in and competing for wins.”

Deegan was joyous in victory lane that September Saturday night, and she knows that it’s all possible thanks to the support she receives from Toyota Racing Development as she’s just in her second year with the TRD program.

“Our first year was Hailie’s introduction to pavement racing and the basics of stock car racing,” said Jack Irving, director of team and support services for TRD. “The 2018 season has been a year of continued improvement for Hailie. Race after race, she has worked on her race craft and continues to mature at each event. Hailie’s hard work has allowed her to engage the TRD tools and resources to continue to develop as a driver and as a strong individual. She is developing at a great pace, and we are extremely happy with her progress in our program. We are proud of Hailie and look forward to continuing our journey together.”

Added Deegan: “It’s a huge privilege to do what I do. Without sponsors, my crew chief, parents, and backing from TRD, it wouldn’t be possible.”

TRD is not the only backing that the young driver has, however. Big-time brands like Monster Energy (which currently sponsors NASCAR’s premier series) and Under Armour have also partnered with Deegan.

Whether it’s heading to Los Angeles to participate in a photoshoot with Under Armour or repping Bell Helmets during a race and drinking Monster Energy once the checkered flag flies, it requires just one look at Deegan’s social media to see that brands want to be associated with the young star.

“This is all still so surreal to me,” Deegan said. “It’s amazing being able to represent so many brands, and without their support, none of this would have happened.”

Off the track, Deegan has a worker’s mindset, something that will benefit her for years to come. She also isn’t shy about the fact that it takes a lot of work to go out and win races and compete at a high level.

One thing that she’s received advice from her father, Brian Deegan, about is dealing with the media.

“I’ve learned a lot from watching him do interviews,” Deegan said. “At first, he would typically go with me, but as I’ve gotten better and more confident, I’ve been able to do more of the media stuff on my own.”

And, on the track, she continues to work hard.

“Some people can go out and just win without a problem, it seems,” Deegan said. “For me, I have to work at it. It goes beyond me, though, and everyone involved plays a role. Personally, in the days leading up to the race, it’s all about the preparation.”

Deegan maintains a busy schedule with one goal in mind: win. The 17-year-old works out daily and will either practice at the nearby go-kart track or at the dirt track at her house.

Although she’s won only once so far, Deegan wants to move up the ladder. She doesn’t want to rush things, though. She’ll know when the time is right, based on how competitive the team is. For Deegan, competitiveness means winning.

“We don’t just want to be competitive, we want to win in every situation,” Deegan said. “I want to win in trucks and win in the Xfinity Series. I don’t just want to do OK and move to the next series because if we’re not great in one, I don’t think we’ll be great in the next. I’ll know if I’m competitive and ready to move up if I’m consistently running in the top three. Go fast and win. That’s the goal.”

When she puts on the helmet and straps into the race car, Deegan is already in her element and having fun, but she remembers a quote from her father.