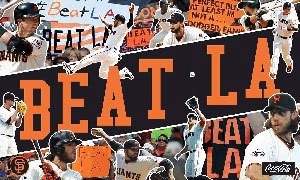 Welcome to the Promo Spotlight! Each week I will look at some of the best promotions that have taken place around the sports world and share them with you. Promotions play an important part in enhancing the fan experience and can sometimes be the deciding factor in someone going to a game or not. From ticket specials to giveaways, promotions are a great way to engage fans and give them a little “something extra.”

With the baseball playoffs underway, it’s time to take a look at the best giveaways of the season. Bobbleheads were the most popular giveaway item this year, but a lot of teams were able to find a theme or characteristic of the player to make them different. Below you will find my six favorite giveaways from the minor leagues and major leagues.

“Beat LA” Flag, Giants on 4/9: No baseball rivalry will ever top the Red Sox and Yankees, but the Giants and Dodgers are a close second. This flag that the Giants gave out in April shows just how great that rivalry is. Think about it — how many teams have had giveaways that say “Beat (insert name of rival here)”? None that I can think of. The Giants found a way to show team pride, yet also take a small jab at their rival, which definitely helps make baseball fun again.

Justin Turner Chia Pet — Dodgers, 4/30: Ch-ch-ch-Chia! I haven’t seen a commercial for Chia Pets in years, but anybody who remembers them just sang that tagline. In April, the Dodgers brought back the popular herb-growing figurine in the form of third baseman Justin Turner. Fans were able to grow Turner’s beard and hair in just a few weeks thanks to this fantastic giveaway.

Ken Griffey Jr. Dual Bobblehead — Reds, 5/21: Back in May, the Reds and Mariners met for a three game series. It worked out perfectly that the two teams Griffey spent the most time with played each other the year he went into the Hall of Fame. Rarely does a team do a promotion involving their opponent, but Ken Griffey Jr. meant a lot to both cities. With one of the most unique bobbleheads I’ve seen, Cincinnati found a great way to honor the Hall of Famer while his former teams played each other.

Caturday — Lakewood BlueClaws (Class-A Phillies Affiliate), 7/9: In July, we were graced with one of the best theme nights ever — Caturday. The BlueClaws went all out with cat-laden jerseys and changing “Take Me Out to the Ballgame” to “Take MEOWout to the Ballgame.” Cats were invited to attend the game (with a waiver) while their owners were served a special Black Cat Cocktail and given a special Caturday t-shirt.

Adrian Beltre Removable Helmet Bobblehead — Rangers, 8/14: The Rangers really hit the nail on the head with this August giveaway because it is unique to Beltre and shows off his personality. We’ve seen many hilarious attempts from teammates (mostly Elvis Andrus) to touch his head without success, but there’s no escape for Beltre with this bobblehead.

You know you want the Adrian Beltre pattable-head Bobblehead. And others: https://t.co/EuTahgC70q (full sked here) pic.twitter.com/zQPNK8HrcT

Pat Venditte “Switch-Pitcher” Bobblearms — Staten Island Yankees (Short Season Single-A Affiliate, Yankees), 8/19: This August giveaway by the S.I. Yankees was a great way to honor their alum. Venditte is the most unique pitcher in the game right now in that he can pitch with both arms, so having a bobble-arms giveaway was almost a no-brainer.

IT'S HERE: The Pat Venditte "Switch-Pitcher" Bobblearms for the 1st 2500 fans on 8/19! Tix: https://t.co/pgjQhuBfzK pic.twitter.com/zuqF9LAmRg