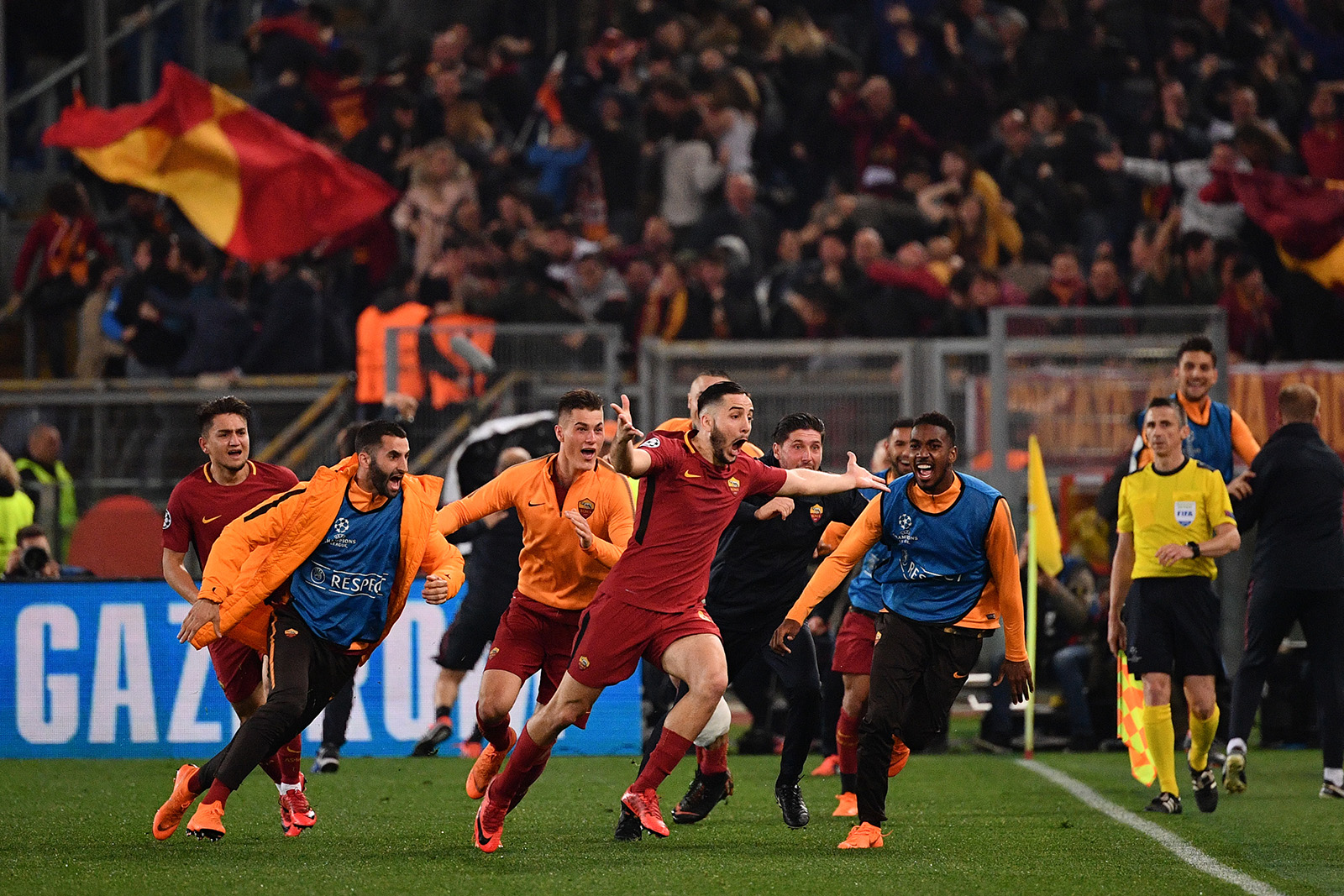 Last week, AS Roma stunned FC Barcelona in the second leg of the Champions League quarter-finals, coming back from a 4-1 first leg defeat to win the match 3-0 and move onto the semi-finals. The match went viral on social media due to both the drama on the field and the creative, real-time content coming out of Roma’s social media channels.

Roma entered the match not only as underdogs against Barcelona, one of the world’s best football clubs, but against all of the other quarter-finalists on social media, all but one of which had higher follower numbers than the Italian club. Despite that, Roma powered themselves into the Champions League semi-finals for the first time since 1984, breaking club digital records along the way and dwarfing the engagement numbers of the other clubs with considerably higher follower numbers in the process.

Heading into last week’s match against Barcelona, Roma knew the odds were against them and that all they had to build their strategy on was hope. That is what Paul Rogers, the head of digital and social media at AS Roma, and the rest of the club’s digital team kept at the heart of their messaging leading up to the second leg clash.

“I don’t think anyone outside of Rome believed it was possible for us to beat Barcelona by three clear goals – but the president, the coach and his staff at the club had all insisted from right after the first game that this tie wasn’t over yet,” explained Rogers. “We reflected that in the build-up to the game, conveying a message that, with the fans behind us, there was still hope.”

Rogers admits that while the club always has goal graphics and traditional gifs ready before a match, he’s not a big fan of preparing every single detail beforehand as it can come across, “as a bit sterile.”

That was certainly the case with last week’s match. Roma quickly adjusted their tone from one of hope to a “quiet belief” after the first goal in the sixth minute. They kept that tone through the 58th minute when the club got awarded a penalty and Rogers said, “the whole atmosphere changed.”

Sensing the shifting emotion, Rogers went over to Roma’s radio commentators and captured their reaction to the penalty goal, posting their impassioned response to Twitter.

When #ASRoma win a penalty against @FCBarcelona… pic.twitter.com/BWzJhncwMT

“A third goal,” Rogers said, “seemed almost inevitable, but when it went in, the coverage started to go a bit mad. I had staff, who have supported Roma for 30 years punching each other, hugging each other, almost falling over but then they’d catch themselves, and stop, remembering they needed to stay calm and composed.”

As the final minutes approached, the staff worked to balance their passion with their professional responsibilities, though Rogers said it was impossible not to get caught up in the emotion of the stadium.

“I’ve sat in press boxes all over the world for almost 20 years and I’ve never seen a press box react like the one in Stadio Olimpico,” he said.

Rogers works with a large international team of digital journalists in cities like Rome, Boston, Cairo, Jakarta, and many more, using Slack to communicate in real time with team members across the globe, something he says is helpful in moments like this.

“It doesn’t matter whether you are in Italy, America, Brazil or Turkey, we communicate as one team.”

This played out as the game ended. Entering injury time, Alex, Roma’s English editor, tweeted “Are you not entertained? Is this not why you are here,” referencing both the rapper Jay-Z, in keeping with the account’s recent love for all things hip-hop, as well as the film ‘Gladiator’.

Rogers took another video of the press box, capturing the moment the final whistle blew. Initially reluctant to post it to the club’s page as he didn’t think it was good enough for the account, he shared it on his personal page. The video soon went viral, and has been viewed over a million times, resulting in Roma and non-Roma fans alike responding with the message, ‘This is why we really love football.’

While Rogers was doing that, Roma’s Italian manager, Emanuele, was struggling to find a way to describe the monumental comeback win in a single tweet, trying to determine what sentence would convey what the victory meant to Roma fans.

According to Rogers, Emanuele tried to get advice from a colleague, but the noise made proper communication impossible, so he was left to his own devices.

“Emanuele just started to type ‘DAJE [translating to ‘come on’ in English] and then just thought, ‘Fuck it!’ and started banging the keys on his laptop like that Kermit gif,” explained Rogers.

After that, all bets were off and Rogers said they just went “Twitter mad,” firing off a goat announcement, a mashup of Edin Džeko goals and the now-famous yodeling Walmart boy (something the club had kept in their back pocket for a long time), a graphic of the rap group Migos, and a new version of the ‘If you don’t love me at my…’ meme to reflect the club’s status of Champions League semi-finalists.

“At that point,” said Rogers, “we were just having fun.”

If you then you don’t
don’t love deserve
me at my me at my pic.twitter.com/mdFvqsm4oR

The freedom to have fun across their channels is not experienced by all European clubs and is something Rogers attributes to the club’s owner Jim Pallotta.

“[He] thinks differently from many owners in football and wants to do things in a new way. He believes in content and gives us a mandate to make the most of it,” said Rogers. “Some people think it’s edgy but it’s not really. It only looks edgy when you compare it to more traditional social media accounts… I think in America, many sports teams and big colleges take more risks than a lot of European football clubs.”

Pallotta, himself, celebrated the win by leaving his hotel to meet thousands of fans and throwing himself into a fountain in the center of Rome. A moment, of course, that Roma documented on social media, demonstrating the inclusivity that is reflected so strongly in Roma’s digital presence.

Recently, Roma changed the way they manage content internally, dividing up work in a different way and better tailoring content to certain platforms. The change had an immediate impact on the club’s social media performance, with Rogers tweeting that it led to new digital club records set on Instagram, YouTube, Twitter, Snapchat and RomaTV+ for the month of March, ahead of the Champions League quarter-finals.

“Our general philosophy hasn’t changed though, and that’s to be fun, inclusive and as engaging as possible. What we’ve tried to do is devote more energy to creating the content that works and spending less time on what doesn’t,” explained Rogers.

A large part of what works is the unexpected, something that has become synonymous with Roma’s social media presence, which is one that avoids the traditional.

“Not everything has to make sense and as we saw with our transfer videos last summer, the less it makes sense, the better it seems to do. We can be weird and fans like it. In a way, they’ve almost come to expect it,” Rogers said.

This affected the club’s Champions League social media success as the new digital structure, coupled with the drama of the comeback, powered the club to enormous engagement that greatly exceeded that of clubs with a much higher social following, particularly in terms of their full-time post.

Photo via AS Roma

While Rogers acknowledges the creativity his team was able to execute under pressure, he also credits the unexpected comeback as something that attracted new eyes to Roma’s platforms.

“The stage was so big, the opposition was one of the two most followed clubs in the world on social media and our comeback was like a football miracle,” said Rogers. “The Roma fans were desperate to keep this amazing Champions League run going and we reflected that outpouring of raw passion in what we posted. We made the most of the moment from an editorial perspective and the fans – and even the non-fans – then did their thing with our content.”

“On Facebook, our full-time graphic broke all previous records for Roma on the platform – with 432,000 Likes. On Instagram, the full-time image more than doubled the previous Roma record on the platform for Likes and Comments – I think there were 379,000 Likes and 25,000 comments,” says Rogers.

Given the excitement, the club held off on sharing a lot of match recaps and interviews – most of those could wait until morning.

“The stuff [the fans] wanted was content that captured the sheer joy of the moment; the sheer madness of the night,” said Rogers.

So that’s what Roma gave them.

“We don’t always get it right and I don’t think we’re the best club on social media by a long way, but on this particular night, the content worked.”