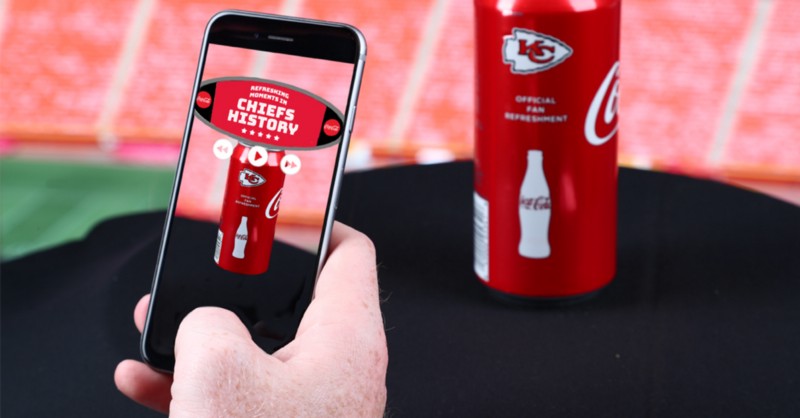 This isn’t your normal ticket giveaway.

While the Kansas City Chiefs are off to a 5–2 record on the field, off it, their digital media department is opening the door for entirely new fan experiences through the use of augmented reality.

In partnership with YinzCam and Coke, the Chiefs created an opportunity for fans to purchase select Coke cans from local retailers, scan the can on their mobile app, and find special codes inside the augmented reality experience created by scanning the can.

Fans can then input those codes on Chiefs Kingdom Rewards and be entered to win a trip to Dallas to watch the Chiefs take on the Cowboys, gift cards or even rewards points.

In what was a first for the Chiefs when it comes to AR campaigns, James Royer, Director of Digital Media & Strategy, believes that it is just the beginning for his team.

“My favorite part is being able to get out front of where we see the industry going. What is exciting to me is getting that first one under our belt and being able to satisfy three different business objectives. Not just doing it to do it. This is a launch pad for future executions.”

Not only has the execution been well received by fans and constituents, the strategy behind the campaign made it easy for the Chiefs’ executives to buy into the idea that Royer and his team presented.

“The tricky part to us from a business perspective was really trying to accomplish three different things:

The fact that we could touch three different business objectives in one campaign was something that definitely appealed to all parties involved.”

Royer also credited Chiefs’ leadership for being actively engaged in what trends are happening in the industry to the success of the campaign.

“I think it starts with our Chairman, Clark Hunt. He is up to speed when it comes to virtual reality and augmented reality, and when we presented the idea it was very quick to be approved.”

In order to pull the campaign off, the Chiefs turned to Coke, their longest tenured partner and to YinzCam, a mobile app and software developer based out of Pittsburgh, who has helped develop AR activations for other teams in the NFL, as well as NBA and MLS.

For YinzCam, partnering with the Chiefs meant having the opportunity to try something creative and new.

“In the Chiefs’ case, the one thing I really liked is that when you twirl the Coke can in your hand, it effectively makes the video rewind and fast forward,” said Priya Narasimhan, Founder and CEO of YinzCam. “That was a really cool effect. You are not expecting that manipulating an object in the real world can cause a digital artifact to change the way it operates.”

While all the parties involved have benefitted, creating a great experience for the fans was the number one priority.

“I think fans are really enjoying it,” said Royer. “We have seen a lot of intrigue in the contest. For the contest you have to find five or six videos and we are seeing that fans are trying to do just that. The usage numbers are consistent. Fans are consistently coming back to it and experiencing it.”

For the Chiefs, that is exactly what they wanted to have happen and part of the reason they kept the experience in the app.

“I think that was the key transition for us, we wanted to do an augmented reality campaign that wasn’t a one-hit-wonder. We wanted something that fans had to constantly check and tell their friends about it. We didn’t install social sharing capabilities, because we wanted to keep that surprise and delight factor. To keep it engaging in a long-term pace, we wanted to make sure that fans had to come in and experience it themselves.”

With Apple unveiling AR kits in the iPhone8 and iPhoneX, and more and more companies putting money into these experiences, the surface has just been scratched when it comes to the influence of AR in sports.

If this is just the beginning, we are in for a fun ride.