When the National Women’s Soccer League announced the Challenge Cup in May, it noticeably did so with several high-profile sponsors in the fold. Procter & Gamble and Secret Deodorant were representing the tournament, Budweiser was presenting the final match, while Google and Verizon had just inked short and long term deals, respectively.

While that slate of blue-chip partners marked another significant stride forward for the NWSL in the year since the U.S. women’s national team won its fourth World Cup, it is the result of a longer process.

At the beginning of 2019, then Real Salt Lake and Utah Royals general counsel Lindsay Barenz began developing an idea called NWSL 2.0. It required a strategic review to evaluate the league’s foundation, a six-month process that ended around last year’s World Cup final.

“We just felt like NWSL 1.0 had achieved its maximum potential, and it was time to take a step back and consider what the league needed to do from a growth and revenue perspective in order to not just be stable, but be sustainable,” said Barenz, now the president of NWSL Media, the arm of the league responsible for sponsorship opportunities. The next step was to capitalize on the World Cup boost during the U.S.’ run, which they did through deals with ESPN and Budweiser in the final week of last year’s tournament.

The Budweiser sponsorship, formalized in July 2019 after the FIFA Women’s World Cup final, was a significant one for the league for a few reasons, according to Sky Blue FC general manager Alyse LaHue. “One is [related to] the credibility of our league, and we’ve always had it,” she said. “We need these high-level sponsors supporting us to help to paint that conversation, and I think we really saw it once Budweiser came on board and the tremendous amount of personal interest they took within the league.”

Budweiser essentially announced the partnership with a campaign titled We Won’t Stop Watching, following up its partnership with the USWNT to include the NWSL. Budweiser announced a further commitment to the NWSL before its championship game in October, teaming up with Megan Rapinoe to find future official sponsors for the league.

“This is something that I haven’t seen at this level in women’s soccer as long as I’ve been a part of it that Budweiser brought to the table,” LaHue said. “It has helped to ease conversations with other partners coming into our league, which we’re now seeing these other high-level partners.”

The Budweiser deal was just the first sign of a changing tide for the NWSL. Barenz and the league knew increased attention would come with the U.S.’ World Cup victory. Still, they did not realize it until they went to market looking for a new broadcast deal, which they struck with CBS domestically and Twitch internationally in March.

“The first indication that something unique was happening was when we interviewed agencies to sell our broadcast rights because lots of agencies were interested in doing that, and we were surprised by the level of interest,” Barenz said.

“We ultimately hired Octagon, and when they went to market, they did so in such a way that was very traditional. It wasn’t, let’s assume certain people wouldn’t be interested in these rights,” she said. “It was, let’s talk to everyone, and there was a lot of interest, and we got indications of bonafide offers of interest from multiple potential partners, and I don’t think we expected that.” 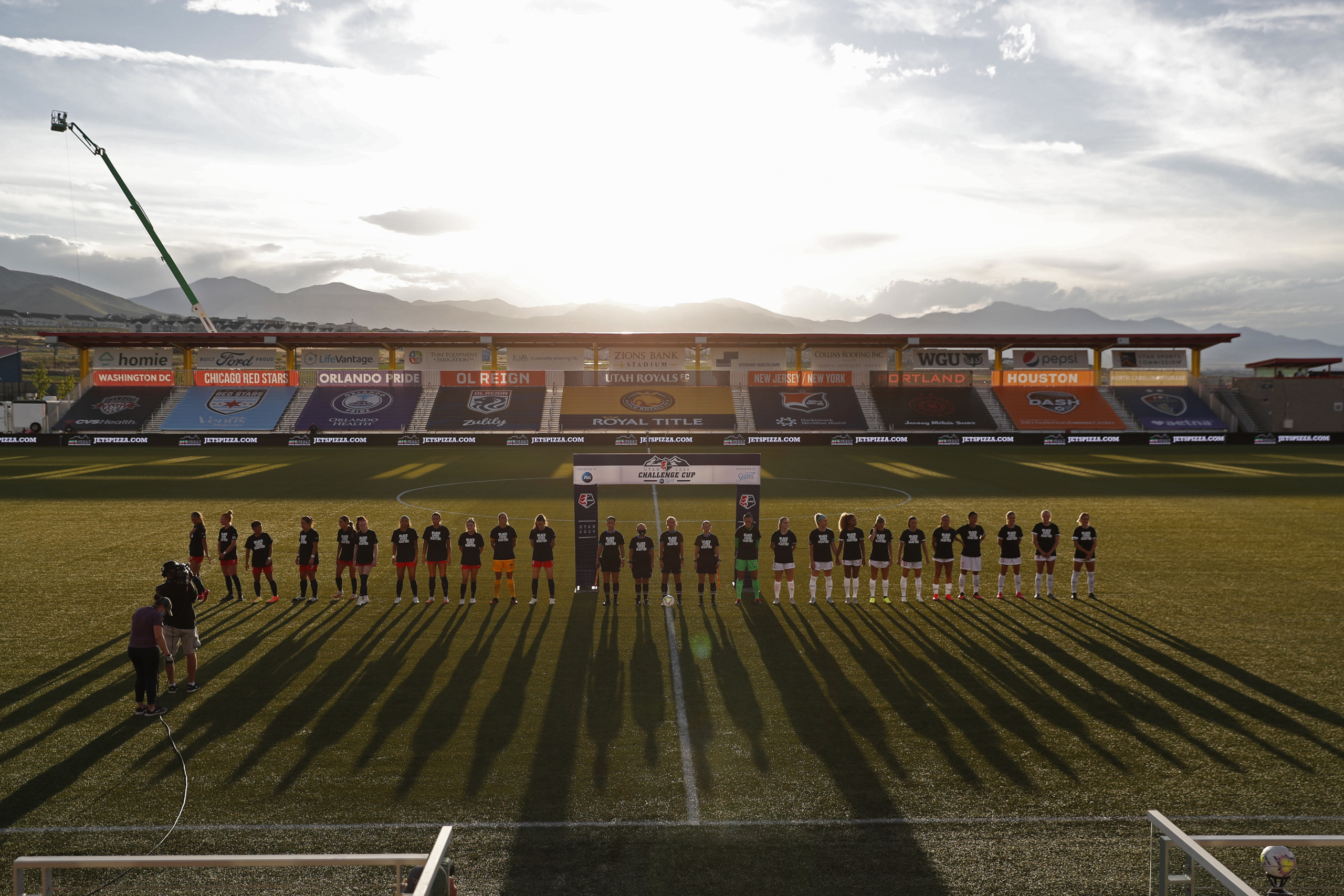 In being the first U.S. contact sports league to return to play, the NWSL and its nine teams had a massive opportunity to reach new fans and establish itself further.  […]

In part, brands were realizing the potential the NWSL always had as a league that hosted many of soccer’s best players, including World Cup winners that had captured national and global attention in 2015 and 2019. They were “dipping their toe in the water and seeing the ripple effect,” Barenz said. The partnerships have shown that potential during the Challenge Cup: in the preliminary round, which ran from June 27 to July 13, the league and its teams drove more than $1.3 million in sponsorship value for its corporate sponsors.

Beyond potential returns, though, the league’s link to the U.S. national team meant both the team’s on-field success and its fight for equal pay resonated with brands.

Budweiser Vice President of Marketing Monica Rustgi said that by the time it partnered with the NWSL, they could no longer ignore the issue.

“The players have taken center stage in the fight for equality, and we want everyone to know that we stand firmly behind their mission,” Rustgi said. “Continued support from both sponsors and spectators will eventually lead to an equal playing field. The ‘Future Official Sponsor’ program leverages our connections and resources to get other brands to step up, continuing the momentum we started last year and the advancement of an important cultural moment.”

Formally supporting female athletes is also a priority of Secret, a brand that also partnered with the USWNT before doing so with the NWSL this year. Secret Deodorant Senior Brand Director Sara Saunders said the brand began prioritizing work with female athletes two years ago while researching why women sweat.

“We, of course, expected the obvious answers like, ‘when I work out’ or ‘juggling work and family,’” Saunders said. “We got into this deep discussion about equalities, and the things that were making women sweat were no longer the things that we expected at surface level. Women were saying, ‘I sweat being able to support my family,’ ‘I sweat being treated equally as my male counterparts,’ etc., so we started to get into these deep-seeded conversations. … We consulted with quite a few folks and found that really, sports and athletics, a lot of these issues come out there first.”

Their search initially led the company to support the USWNT after last year’s World Cup and follow up with donating 9,000 NWSL tickets at the end of the 2019 season. Their further commitment, Saunders said, allows Secret to “[make] sure [players] are able to retire and have these great brand relationships by getting their faces more popular,” and “[put] our media dollars behind the message.”

The timeline of the USWNT’s public fight for pay equity lines up with shifting global attitudes towards the topic and different forms of inequality, particularly after the Me Too and Time’s Up movements provided further spotlight to the unequal treatment of women. Saunders said brands have shifted in recent years because consumers expect them to take stands on inequality issues, citing a Forbes study from 2018 that said almost 70% of millennials in the U.S. take that into consideration when they make purchasing decisions. Barenz and LaHue noted that women’s sports can play a unique role as companies try to prove they support women.

“It’s the metaphorical billboard that every sponsor of the NWSL gets that flashes, ‘We support women. We believe in equal opportunity. We believe women should be paid their value,’” Barenz said. “It’s very hard to authentically communicate that message because if you just say it, that’s suspect, but if your actions demonstrate a commitment to women, which investing in the NWSL demonstrates, it puts your money where your mouth is.”