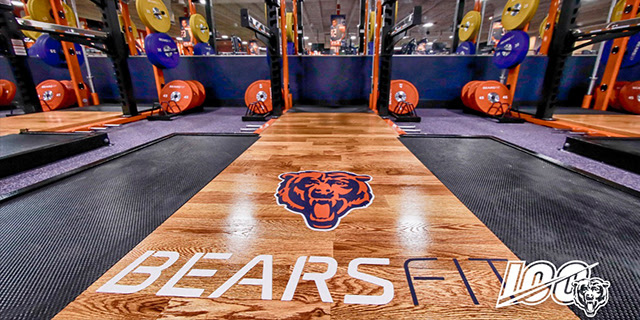 The Chicago Bears want their fans to work out like their players. Well, not actually, but at least in a facility that feels the same.

Yesterday, the team opened Bears Fit, a themed gym that allows fans to “train like a Bear,” according to Mick Zawislak of the Daily Herald.

2. The new gym is just four miles from Halas Hall, the team’s headquarters and training facility.

3. So far, 40 Bears alumni have signed up as gym members, according to Zawislak.

4. Not only can you train like a player, you can eat like one, too, thanks to a menu of smoothies similar to those offered at Halas Hall.

Once a Sports Authority before the company filed for bankruptcy, the 45,000-square-foot space has now been turned into a fitness center complete with everything from a 40-yard turf field to a yoga studio, group fitness classes, saunas, steam rooms, tanning beds and an interactive kid club.

It even has a recovery center that sponsored by Advocate Health Care that features two cryotherapy chambers and four hydromassage chairs.

They aren’t the only team getting fit…

The Bears aren’t the only ones hoping that their brand can transfer to the fitness space. In fact, both the Cowboys and 49ers have launched similar gyms with “fit” attached to the name of the team.

The Cowboys were the first team to open a location in 2017 and already added a second one this year. The 49ers followed suit, opening their first location in 2018.

All of the facilities have the same look and feel because they are part of a joint venture between each team and Mark Mastrov, founder and former chairman of 24 Hour Fitness.