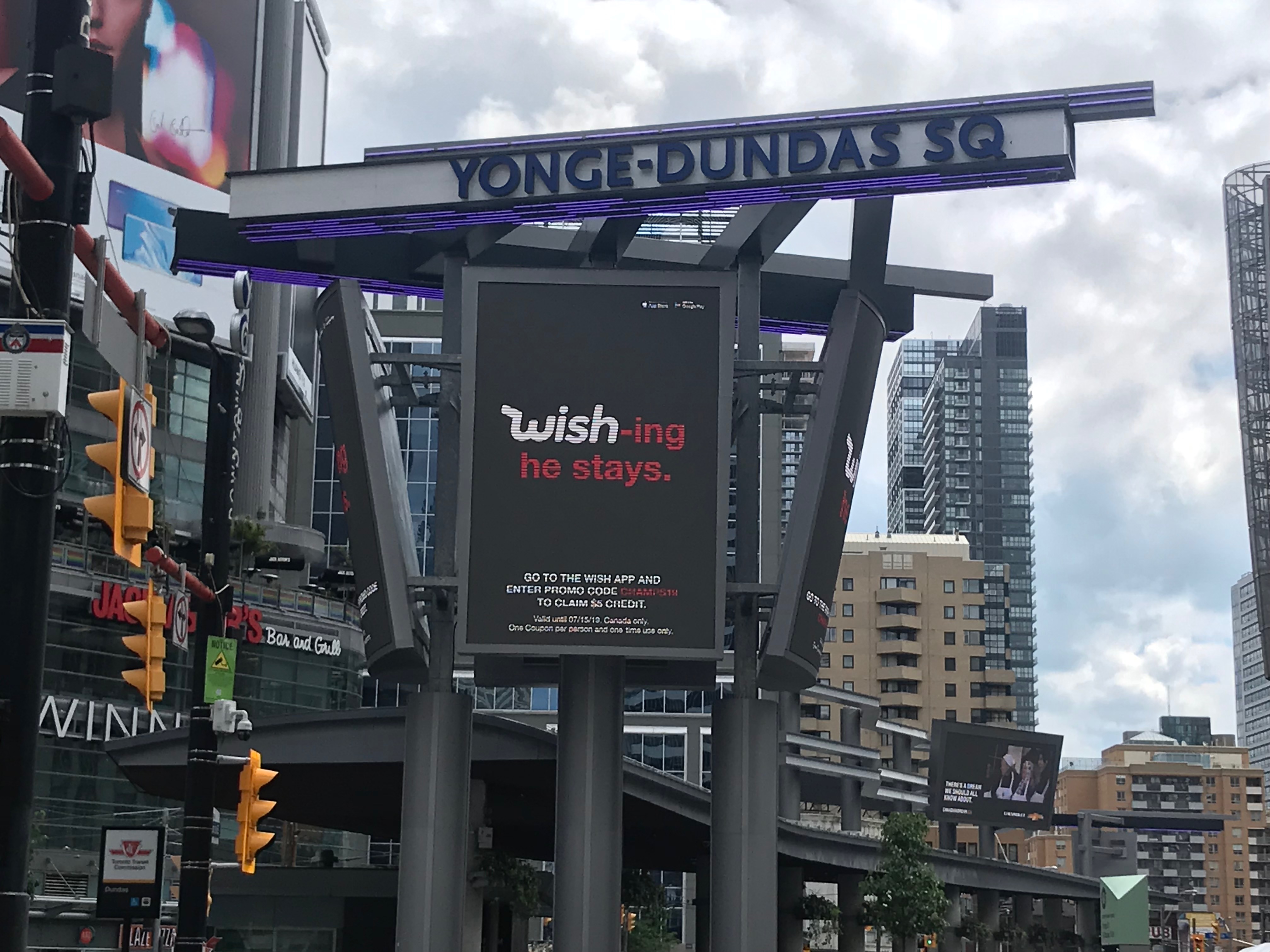 With NBA free agency now open, all Toronto Raptors fans are wishing for is a contract extension for Kawhi Leonard.

Across Toronto, a new advertisement popped up last week seemingly in agreeance. Seen across traditional billboards as well as on digital advertising on taxis and the sides of trucks, a message that says ‘Wish-ing he stays’ can be seen in Raptors’ red and black. Fans refreshing ESPN on their mobile devices will see it also. Ditto in other Canadian cities like Hamilton and Montreal, the latter where the messaging is in French.

The viral campaign is courtesy of e-commerce platform Wish, who is combining their roots in Toronto, their burgeoning exposure to the NBA and basketball and an easy layup thanks to the pun in their name to be part of the conversation around where Leonard ends up.

The ad, which features the word wish in the company’s font, also offers $5 off for anyone who enters the code ‘CHAMPS19’ in the Wish app.

Sam Jones, managing director of partnerships at Wish, said internally at the basketball-crazed company, all anyone wanted to talk about was what was going to happen in NBA free agency – especially with Leonard and the Raptors. The company’s two co-founders met at the University of Waterloo, roughly 75 miles from Scotiabank Arena.

Jones said the concept for the ad was put together about three weeks ago following the Raptors’ win, and the creative was done shortly thereafter – purposely done as simple as possible as to allow for it to be used across multiple mediums.

It quickly gained traction across Toronto and those two other major Canadian cities, with the ad popping up across fans’ social feeds. Wish did indeed get Snoop Dogg in the conversation as well – he shared a video on Instagram with his 33 million followers discussing the signage, which to-date has been viewed more than 1.2 million times. He also tagged Drake in the post.

That connection came via Wish’s jersey patch sponsorship with the Los Angeles Lakers, a three-year deal signed in 2017 worth more than $12 million per year. As part of the deal, Wish has courtside seats to the Lakers, which it often provides to celebrities in exchange for them wearing a Wish t-shirt to the game. Celebrities such as Kendall Jenner, Halsey and Snoop Dogg have all taken part. Wish has a relationship with the rapper, who shared the marketing campaign but without it coming across as purely a sponsored post, Jones said.

Jones said the exposure for Wish through its partnership with the Lakers and even this campaign in Canada has been crucial for the nine-year old company, which despite having more than $1 billion in revenue still faces some skeptical consumers who think it might be a scam due to the low prices for the merchandise available on its app. Wish acts as an intermediary for companies and factories, allowing them to sell directly to consumers and thus keeping prices very low. “When people started to see our logo on the Lakers jersey, it provided a ton of legitimacy, as well as a tremendous amount of comfort which has been a real plus for us,” Jones said.

Wish is currently in discussions with the Lakers about extending the partnership beyond next season, when it is set to expire, Jones said.

READ MORE: Anthony Davis wants his chips with the dip

Currently, 50% of Wish’s customer base is from Europe, while 30% is from North America. The remainder is located across the globe, predominantly coming from Australia, South Africa and South America.

Since the announcement it had struck a deal for the Lakers’ jersey patch, Jones said the company is almost approached daily regarding other sports sponsorship opportunities. However, given its global footprint, Wish is more likely to lean into one of these campaigns that Jones calls “tribal marketing,” aiming to be part of a viral sports conversation in a key market.

“When we look out into sports marketing, there is almost too much clutter in it,” Jones said. “We want to be making those statements to the tribe around a team or a club – this is something that can be easily replicated and rolled into other sports, such as in New York or Manchester around a theme or narrative that fans are talking about.”

Another benefit of this approach is the cost-effectiveness of the campaign. Compared to the multi-million dollar deal with the Lakers, Jones said this activation around Leonard has a very “short-term cost, and is more opportunistic – things like taxi and newspaper advertising are not expensive.” He declined to comment further on the cost.

Wish is also planning on pivoting the campaign depending on what Leonard chooses to do – either becoming ‘Wish-es Come True’ if Leonard re-signs, or ‘Wish-ing Him The Best’ if he leaves to join another city. That campaign will go live as soon as Leonard decides, and Jones said that creative will run another several days – although like will be fewer days if he signs elsewhere.

“We think a campaign like this gives people a glimpse into the personality of Wish,” Jones said. “It’s all about going into a city like Toronto and saying ‘yeah we know what you’re talking about,’ and place ourselves in that conversation.”