“This storm is developing.”

In December 2018, NHL Commissioner Gary Bettman announced that Seattle would be the home of the league’s 32nd team, launching in the 2021-2022 season.

Since then, little has been known about the newest addition to the NHL – until July 23rd. The unknown surrounding the Seattle team’s identity had started to reach its apex, and the sports world was caught in the eye of the storm.

“We wanted it to feel like the beast and that there was a mystery,” Savannah Hollis, the Seattle team’s social media manager, said.

In the team’s launch video, the viewer is immediately brought to an aerial view of Seattle and its port along the Puget Sound. Subsequent shots take the viewer from the water to the outdoor mountain ranges that surround the city. From there, the Seattle hockey story is brought to light.

The last time Seattle hosted a hockey team was the Seattle Metropolitans, which played in the Pacific Coast Hockey Association from 1915 to 1924. The launch video’s climactic moments harken back to those days by showing off skaters like Harry Holmes, Jack Walker, and Cully Wilson, who each propelled the Metropolitans to a Stanley Cup title in 1917 – becoming the first American team to win it all.

Waves crash over the video. Lightning strikes. Wooden ships navigate through the difficult waters. After the viewer wades through the storm, the Seattle logo is revealed before giving way to the biggest moment: the team will be known as the Kraken.

“The goal of us framing it was to really make it like exploring the mystery,” Hollis said. “You’re getting all these shots of these intense, deep waters and you’re kind of like, ‘Okay, what’s going on?’ We wanted to really drive that home, while also letting our fans know: this is who we are.”

In a matter of minutes, the Kraken had gone from being an unnamed, unknown team to the latest viral sensation in professional sports. In its first week live, the launch video has drawn more than 8 million impressions, 1.7 million engagements, and 5 million video views on Twitter.

Within 24 hours of the brand reveal, the Kraken grew their social media following by 157% and garnered more than 39 million impressions across all of their platforms. Twitter alone accounted for 25.6 million impressions, 129% growth overall, and was a top-three trending moment in the United States on July 23. During that time, the team also had an 85% positive sentiment rate on social media.

As was portrayed in the Kraken’s launch video, the road to July 23 was defined by thoroughness and leaving no stone unturned. In mid-2018, the leadership team had decided they wanted fans to play a vital role in the development of the Seattle club’s brand.

Early on, the Seattle organization conducted numerous fan-listening sessions, and even created a digital fan portal where employees asked various polling questions. The informal focus groups eventually led to formal focus groups, where Seattle would ask them, “What should the team name be?”

“It was this name [the Kraken] that kept rising to the top,” Heidi Dettmer, Seattle vice president of marketing, said. “I think we ended up with a list of 1,200 names that we’d either heard or came up with internally. We took each and every one of those very seriously and then did the fan listening to start to hone our list and eventually get to this name.”

Dettmer said that the past two years have also been defined by work between Seattle and the league. Outside of periodic check-ins between the two, the league lent a helping hand in the trademark process. While the Kraken were moving forward with their trademarking paperwork, the coronavirus pandemic put the NHL season on pause beginning on March 12. 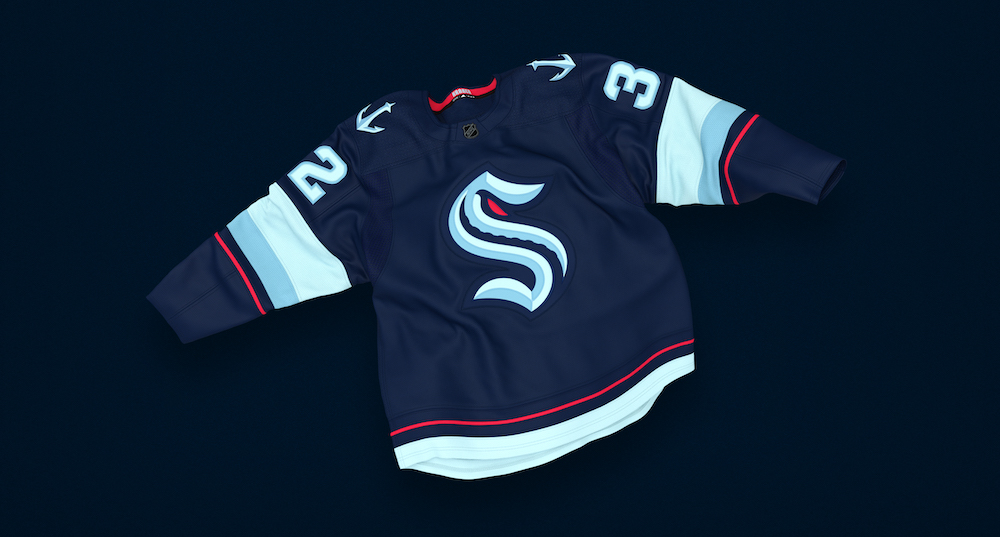 Seattle’s expansion NHL team now has a name: Kraken. Its logo was also unveiled yesterday, which features the team’s primary colors of ‘deep sea blue’ and ‘ice blue.’ The Kraken […]

Despite the suspension of play for several months, Dettmer said that had no effect on the Kraken’s brand reveal. Until all of the legal paperwork was resolved, the team was not going to move forward anymore than it already had.

“Obviously there was a lot of backend work that we did along the way, but the trademark played a big role in the timing as well,” Dettmer said. “The league has been partners with us through this entire process … they’ve really been by our side.”

Since the NHL began working with the Seattle organization in 2018, CMO Heidi Browning has been impressed with the newest expansion team’s efforts at raising brand awareness. From the behind-the-scenes views of the Climate Pledge Arena to imploring fans to assist the team along the way, she had no doubt about Seattle’s evolution during this time.

Browning has also enjoyed the sly creativity showcased by Dettmer and her department thus far. The night before the viral launch video, Seattle released a teaser video with hidden Easter eggs to reward fans who were paying attention, while simultaneously maintaining the mystery. While Dettmer pointed out that the Easter eggs were not as popular of a subject on social media as she would have thought, it nonetheless resonated with Browning leading up to the eventual reveal.

“The most impressive part of this is that Seattle kept the name and the logo design secret until the reveal,” Browning wrote in an email. “In today’s world, that is an admirable achievement.”

When the trademark process was finalized, the Kraken gave themselves five business days before proceeding with the launch. During that time, the other 31 clubs – with the help of NHL Social Media Manager Rebecca Friedman – began drafting their congratulations and warm welcomes to Seattle through a group chat that was eventually posted on social media.

“All of that work was done ahead of time by the clubs, without having any clue as to what our timing was, what our brand was or anything,” Hollis said. “And then we worked with them to kind of help make this a really special moment because I think a lot of times what you see across sports leagues is a lot of graphics that say, ‘welcome to the league’ or something like that. We wanted to do something just a little bit different, and I think everybody was very open to that. You’re starting to realize that people and fans want to see stuff that’s more engaging and a little bit more outside of the box. We were super grateful for all of their help and support in that area.”

When Dettmer looks back at 2018, she saw the biggest challenge being how to keep the momentum going and people engaged after Seattle was named as a future expansion city. Now that there is a brand, the Kraken’s July 23 launch is the latest of many milestones they have been highlighting on digital and social media. Dettmar pointed to the arena’s approval in September 2018, breaking ground on it that December and breaking ground on the training camp facility in February 2020 as other important moments.

Dettmer sees future milestones honing in on areas like jersey sales and personnel hiring. Hollis herself is looking forward to equally crucial events that may get lost in the shuffle, such as the expansion draft, regular draft and developmental and training camps. Browning agrees that covering marquee events like these will keep the fan interest alive for the foreseeable future.

“They are stoking the hunger for hockey by promoting the Stanley Cup Playoff Qualifiers and engaging fans in conversations about the teams, players and game,” Browning wrote in an email. “To build on the success that’s brought them this far, I imagine they will continue to provide behind the scenes content of the Climate Pledge Arena and provide more hockey 101 education for their fanbase. They also have a team pup to add to the collection of NHL clubs with dogs who happen to be really talented with social media. Lastly, [the expansion] draft will be a big moment for Seattle and I’m sure they will have lots of clever ways to celebrate their new roster.”

Above all else, neither Dettmer nor Hollis want to lose sight over connecting with the Seattle community about the latest sport coming to them in 2021.

“We are a hockey city, but we haven’t had a professional hockey team in [nearly] a hundred years,” Dettmer said. “There is a little bit of an education process to happen, and we’re so excited that the league is returning to play. Everyone knows playoff hockey is just such an awesome gateway for the casual fan to get into it. There’s nothing more exciting than playoff hockey, so I think you’ll see us really lean into that to educate our fans about the game.”