Jeff Dickerson, like a lot of NASCAR owners, started as a racer himself. His racing began on dirt tracks before he became one of the most notable driver agents in the sport

Dickerson has repped two-time NASCAR Cup Series champ Kyle Busch among others at Motorsports Management International. Given his racing background, he ran MMI’s driver development program as part of his nearly decade-long stint at the firm. In 2010, Dickerson and business partner TJ Puchyr founded Spire Sports + Entertainment, which eventually acquired ECHL teams in Greenville, S.C., and Rapid City, S.D. as it branched from promoting races to owning a single-car NASCAR team in 2019.

Spire Motorsports netted one of the most unlikely wins in recent years at Daytona Motor Speedway with Justin Haley at the wheel. As sponsorships have been harder to come by — even before the pandemic — Spire Motorsports announced over the summer that it would expand to a two-car operation in 2021.

Dickerson, 45, chatted with Front Office Sports about the economics of the sport and his decision to expand ahead of the Season Finale 500 at Phoenix Raceway on Nov. 8.

Front Office Sports: The pandemic led NASCAR to push back its next generation car to 2022, but you announced Spire Motorsports would add a second car after that decision. That’s not a cheap thing to do — purchasing new chassises you can only use for one season — before having to do it all over again. Why not wait until 2022?

Jeff Dickerson: We had planned on expanding to two cars before the pandemic. The fork in the road for us wasn’t June or July [after NASCAR’s decision to wait on the next generation car]. The fork in the road for us [to field two cars] was when we took our first step by purchasing the No. 78 charter. There aren’t a lot of successful single-car teams. You go to two cars for competitive reasons.

There isn’t an economic reason for expanding next year. Your accountants aren’t going to understand that you’re going to buy this equipment that is largely going to be obsolete at the end of the 2021 season. There’s no economic benefit to that. Observers, maybe like you, would say, ‘Hey. Dumbass. You have to buy cars twice. What’s your problem?’ We wanted to expand in ’21 because we need to figure out how to run a race team.

FOS: Some major sponsors have left the sport in recent years both on the team and series level well before the pandemic. You’re expanding during a very difficult environment even for established teams. How much harder does that make it for Spire?

JD: I’m in the ‘it’s always difficult’ camp. Sometimes, sponsors leave because a team is a victim of its success. From an agency side, I thought we did everything right with 5-Hour Energy [a sponsor of Martin Truex Jr.’s title run in 2018]. They won the championship. They had climbed to the mountaintop. Maybe they looked around and said, ‘Man. We really invested a lot to get to this mountaintop. Maybe it’s the best time to exit.’ That is certainly a challenge within NASCAR, but we bring a different perspective. We own two hockey teams. We promote 30-40 races a year. All that has opened our eyes.

Sponsorship is a challenge. Period. Out of every hundred conversations, you’re trying to close one. I don’t care if that’s in racing, hockey or anything else. It’s just that it’s always a challenge and it does force you to be creative. What you’re trying to do is create a platform where the value of the proposition is worth it for the sponsor.

FOS: There’s been talk about reducing the cost to run in NASCAR that’s been going on for more than a decade. The cost to run a single title-contending car was estimated to be more than $15 million. The next-gen car along with schedule changes announced more than a year ago were supposed to bring those costs down. What do you make of the actions NASCAR has taken since you became a team owner?

JD: Those changes get a lot of attention. You hear about ‘cutting costs’ and ‘streamlining the schedule’ and ‘shrinking the footprint.’ Those are all buzzwords and those are going to get a lot of attention. What we are all trying to do is reset the value proposition for sponsors. We’ve gotten into the habit of telling sponsors, ‘This is what we need,’ instead of asking them, ‘What is this worth?’ You can say, ‘Hey we need $500,000 to race.’ But you’re going to hear, ‘We aren’t going to [expletive] give you $500,000.’ 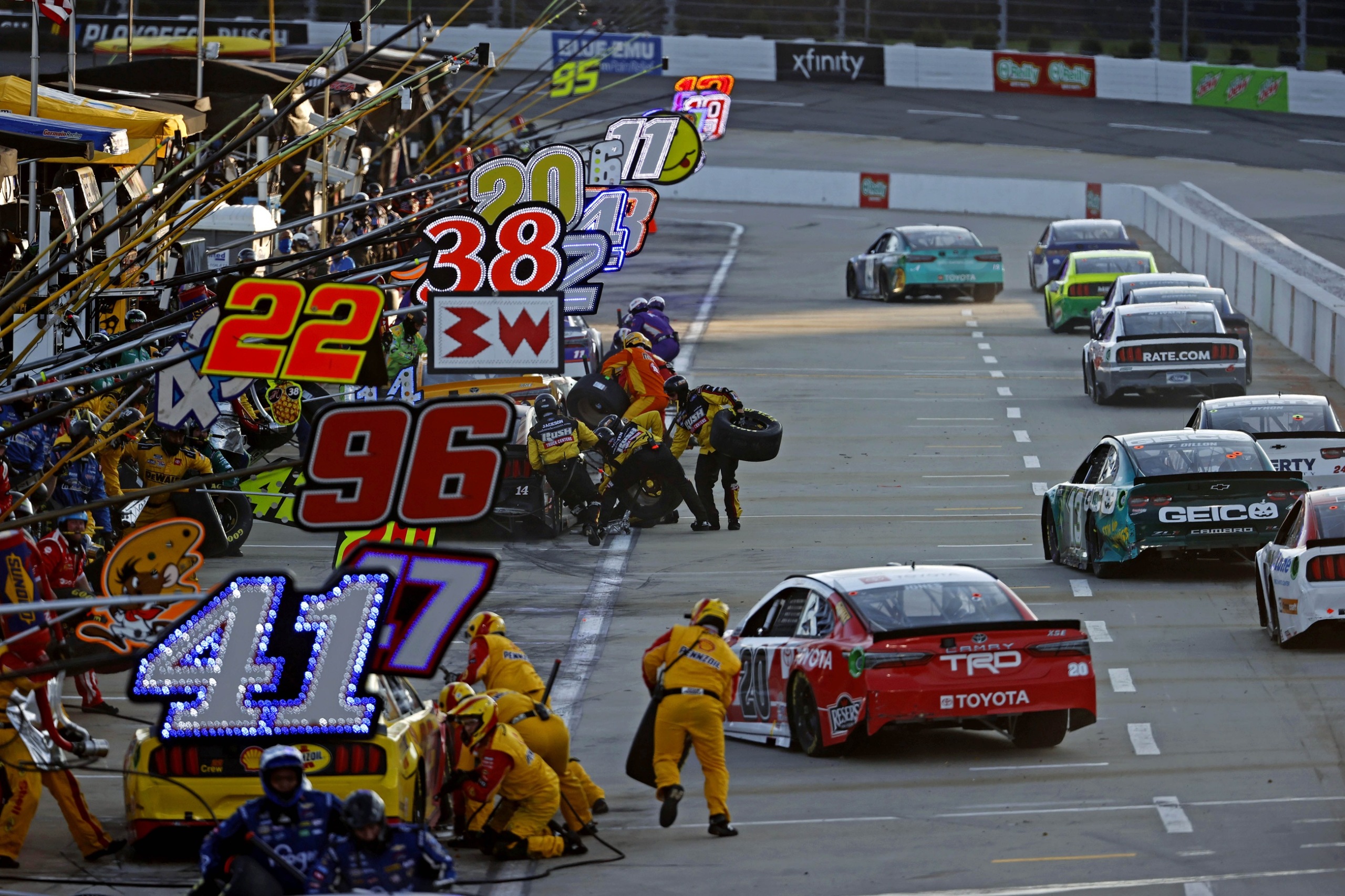 Season of Change in NASCAR Concludes at Phoenix Raceway

NASCAR closes out its schedule at Phoenix Raceway in a year of change for the series even outside of the pandemic.

FOS: NASCAR’s diversity efforts haven’t led to many non-white drivers in the sport. Bubba Wallace remains the only full-time Black driver in Cup as he wraps up his third and final season with Richard Petty Motorsports before he joins 23XI Racing, a new team formed by NBA legend Michael Jordan and NASCAR veteran Denny Hamlin. Spire Motorsports hasn’t announced its two drivers for next season. How important is to the team to develop a driver from a diverse background to race on the Cup level?

JD: That’s a great question. I think anybody you ask about me and TJ would say we aren’t afraid to take a chance on anybody who we think could do any job in any of our companies — in any position — including driver regardless of their race or gender.  So on principle, or as you ask the question, we are and would be committed to developing drivers from a diverse background. I think NASCAR does a great job identifying candidates for the Drive for Diversity and … that has been a real win for our industry and for all potential drivers. We know there are plenty of drivers out there that if given the opportunity they can do the job and I don’t think there is another firm that has found more opportunities for young drivers than us. It’s in our blood and that will, of course, carry on as owners too. We don’t just turn those values off.

FOS: You’ve been around NASCAR a long time as a spotter to agent to car owner. The current leadership — led by Chairman and CEO Jim France, President Steve Phelps and Vice President of Racing Operations Steve O’Donnell — have made a lot of changes over the last couple years that many observers say were overdue. How do you feel they’ve done in changing both the culture and economics of the sport?

JD: There’s an obvious change in the energy and optimism in the garage. I really don’t know how you couldn’t be bullish on NASCAR after how Phelps and O’Donnell navigated things this summer [amid the pandemic]. I’m not reading the talking points here. With those guys in charge, you really can say anything to them when you have an idea to improve the sport. They literally give us a voice. It’s not lip service.

FOS: The 10-week break in the schedule resulted in cramming in more events into a shorter period of time. That meant a three-day event with qualifying and multiple practices were crammed into race day, partially to limit drivers, crews and team members exposure to COVID-19. There’s talk that NASCAR could adopt those changes even after the pandemic. What’s your take on doing so as a cost-cutting measure?

JD: I think next year is going to be the most economical year that you can run in the NASCAR Cup Series with the formula you have now. I think we will see a bulk of one-day shows in ’21. Jet fuel costs the same, but you have [fewer] hotel costs. But the biggest thing is the cars. There’s an inventory of the existing chassis. You have an R&D freeze, so that cuts down on development costs. We are stepping up and we are trying to find the right place [in the sport] because our bet is that the other teams comes to us [cost-wise]. If we are in a place where there are still $20-25 million budgets and we land at that, we are doing it wrong. Our view is that this should live between $8-12 million per car once the new car comes out in ‘22.

Andy Jassy took over as Amazon CEO on Monday, taking the reins from Jeff Bezos of one of the world’s most powerful companies.