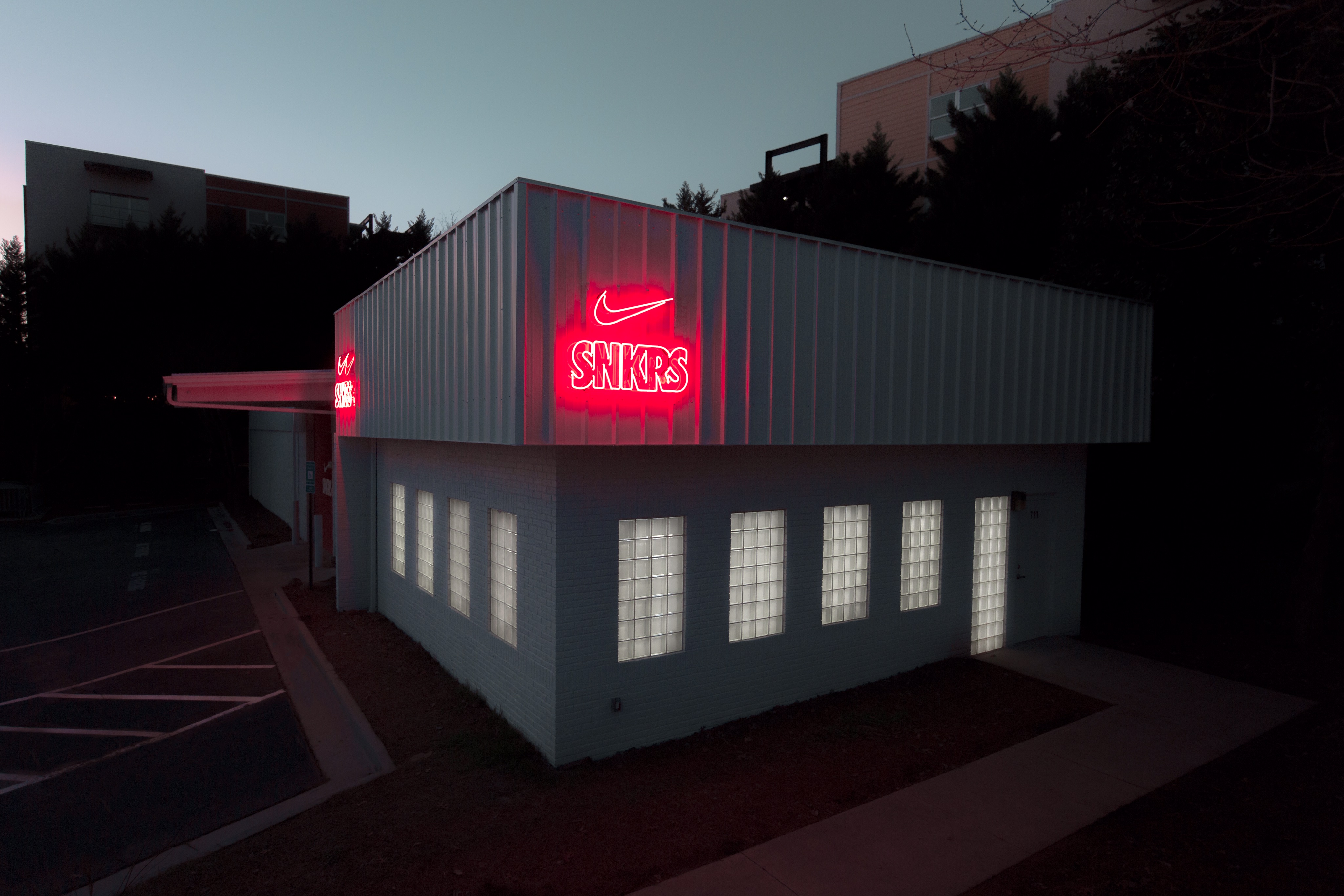 On January 26, Nike opened Super Bowl Week in Atlanta with the first-ever SNKRS pop-up experience. The concept is simple for SNKRS users: Scroll through the app for the shoe you want, buy it, watch the shoebox get pulled through a transparent wall and take the kicks from a bottom compartment.

Then walk out the door with everything already digitally paid for.

Like the app version, the SNKRS pop-up — which will remain open through Air Max Day on March 26, long after the Patriots or Rams lift the Lombardi Trophy — will constantly be changing inventory. Pairs that may be sold out on Nike.com or the SNKRS app can show up at the SNKRS pop-up. New releases, throwback kicks, anything is fair game. Of course, Atlanta-specific sneakers are making appearances as well.

Mirroring the app, an in-store digital ticker also keeps shoppers updated like the “SportsCenter” bottom line. The LED screen tells customers which shoes are new releases, which are low in inventory, which are sold out, etcetera.

In a way, the SNKRS app is a middle-ground between traditional retail and online shopping.

“I think there’s always still some nostalgia of going in and picking out shoes and touching them and seeing them,” said Josh Benedek, Nike North America media relations director. “We’ve taken all the heavy lifting out of that. All your preferences, all your credit card payments, everything like that is already set up on your phone. You can just come here and do what you like to do, which is the fun part, looking at shoes. It makes that purchasing much easier.”

At @Nike’s first-ever SNKRS pop-up in Atlanta. Use the SNKRS app, order the shoes, they drop down in the box. In-store ticker and app let you know what’s in, what’s new, what’s low inventory, etc. #Nike53 #SBLIII pic.twitter.com/lj8Ea7faWU

For Super Bowl week, inventory leans toward “high-heat” shoes and more general models to cater to the masses of tourists. However, after New England and Los Angeles fans leave town, Atlantans should expect even more designs geared toward the city. For the hardcore, sneakerheads, SNKRS Pass is available to those in a 25-mile radius and shock drops keep customers surprised in-store.

Oh, and don’t worry, if you want to try specific sizes, a rep can help with that. And if you don’t have the SNKRS app, you can pay in-person. But that’s not the point of the pop-up.

While SNKRS is at 711 10th Street NW, across the street, at 760 10th Street NW, Nike has rented out the Westside Cultural Arts Center for Super Bowl week. Rebranded as the “Nike Studio of Dreams,” the appointment-only space features various opportunities of creation. A customization bar allows fans to design their own football jerseys, t-shirts and sweatshirts using a design palette featuring work from local Atlanta artists Dr. Dax, FRKO, SNAX Ink and Zipporah Peay.

Nike has also partnered with Cam Kirk Studios to give fans the opportunity to see the world through the Atlanta-based artist’s mind. Kirk, a 29-year-old Morehouse College grad, has photographed Young Jeezy, 2 Chains, T.I., Schoolboy Q, Gucci Mane and Metro Boomin, among others. Visitors at the Nike Studio of Dreams can experience the same theme.

“Our Studio of Dreams Space is kind of a take off JDI (“Just Do It”), which we just celebrated our 30th anniversary of,” Benedek said. “We are empowering the consumer to reach their crazy dreams and create content. This space here allows them to be able to access content that they couldn’t before.”

In the three days leading up to the Super Bowl, the Studio of Dreams will host three “Just Do It” talks with athletes and creators. Travis Kelce, Russell Wilson and Victor Cruz will be among those sitting on panels.

And then there’s the talk that should make people emotional.

It’s true. About 12 years ago, Dunn — who played with the Falcons for six of his 12 NFL seasons — presented Watson and his family with a fully-refurbished home. Watson and Dunn’s conversation on creation will likely go beyond sneakers and apparel.

Rounding out Nike’s Super Bowl initiatives, the brand has partnered with YouTube to bring in a green screen at the Studio of Dreams. The makeshift set will be used to help Nike athletes sharpen their craft in generating custom content. Nike is also fusing with A Ma Maniere, a locally-based luxury apparel and footwear boutique, for the week, crafting crossover merchandise at A Ma Maniere’s Atlanta location and the Studio of Dreams.

The Super Bowl provides brands like Nike a unique opportunity to connect with customers in exclusive, in-person manner. For Super Bowl LIII, the setting is Atlanta. And for Nike, that means an emphasis on exclusive sneakers and custom apparel.