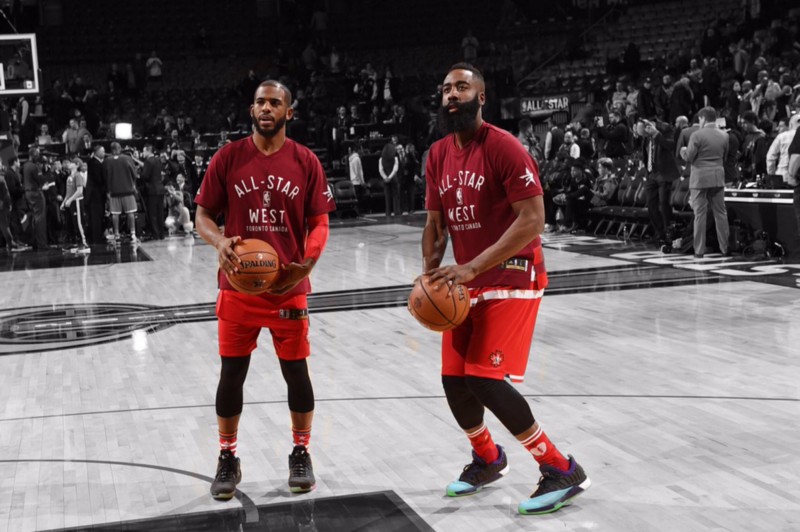 While fans reveled in the news, teams were welcoming their new players.

For NBA fans, we’ve reached the time of the year where the season has ended, a champion has been crowned, and the draft has wrapped up. Now we’re at the point where the excitement on Twitter and Instagram may even rival the action on the court: Woj Bomb Season. Between trades and free agent signings, NBA rosters are being shaken up and digital teams have the task of introducing the new faces of the franchise to their supporters via social media.

Arguably the biggest trade of the offseason so far has been the one that sent nine time NBA All-Star Chris Paul to the Houston Rockets in exchange for seven players, a future 1st round draft pick, and cash considerations.

Much of the media criticism of the trade surrounded how Paul and current Rockets’ guard James Harden would be able to share the ball. The Rockets creatively addressed that subject with a well produced video that cobbled together Paul’s highlights and Harden’s highlights to look like they were sharing the floor.

Welcome to #RedNation @CP3. Can't wait for the season to start! ???????? pic.twitter.com/NsDwYfuqNT

On the other side of that trade, the Clippers welcomed their new additions with a photo set that included jersey swaps of all of those players as well as a thank you to Paul for his six seasons in Los Angeles.

From a graphic design standpoint, jersey swaps are particularly difficult to do perfectly. Based on the high level of detail in that image, the Clips’ designer did an impressive job portraying the athletes in their new duds.

Some of the most creative posts of this nature came from the Portland Trail Blazers when the team sent Tim Quarterman to the Houston Rockets in exchange for cash considerations. Most teams would follow a transaction like that up with a simple press release. However Portland saw it as an opportunity to let their signature wit shine through.

"This trade is a blessing. I'm ready to grind, Rip City. I think I can make an immediate impact out on the floor." — Cash Considerations pic.twitter.com/iRkC5vfwps

On a sadder note, the Miami Heat officially waived forward Chris Bosh on Tuesday after Bosh spent the last year or so dealing with blood clots.

Bosh was a part of two championship seasons in Miami and ranks in the top ten in franchise history in points and rebounds. As part of their goodbye to one of the best players to take his talents to South Beach, the Heat put out several pieces of content wishing Bosh well and remembering his biggest moments.

“Chris changed his life & career when he came to Miami… he changed our lives for the better, in a way we never would've imagined." – Riley pic.twitter.com/HX4glZVKg9

For one, I like the hashtag Miami chose to use for this event incorporating Bosh’s jersey number that team president Pat Riley indicated will be retired. Second, they achieved a nice balance in their content of simplicity and emotion as Heat fans recall some of the greatest moments in franchise history that Bosh was front and center for.

With free agency just getting started, many confirmed player additions haven’t been made official yet with the league office. After July 8th, when the moratorium ends and free agents can officially sign, we’ll undoubtedly see some more outstanding content from the NBA’s top social teams.

What’s been your favorite piece of social content welcoming a player to a new team?

If you liked this, click the???? below so other people will see this here on Medium.