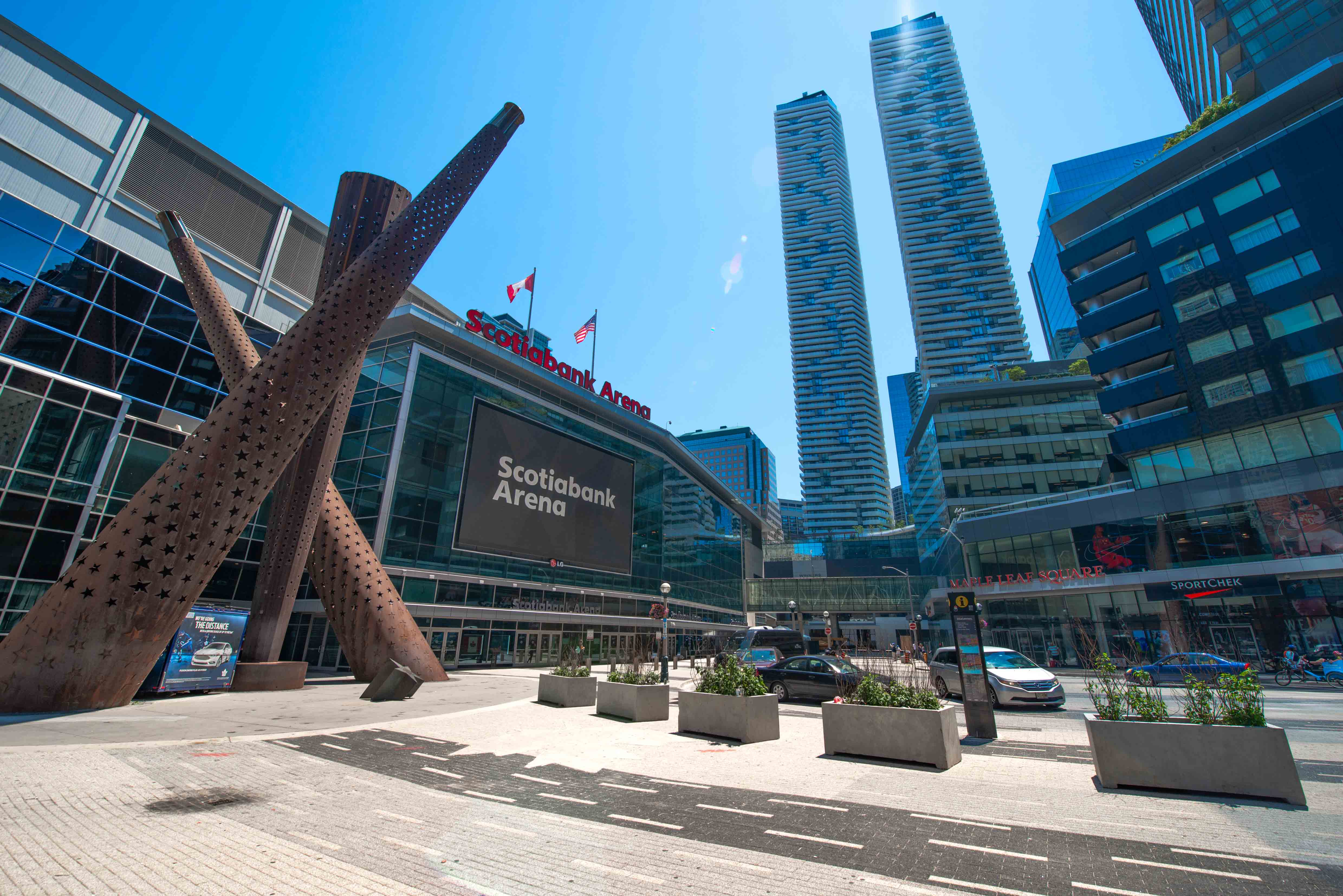 Since the Toronto Raptors’ 2019 NBA title last season, basketball in Canada is in high demand. Now a new tournament is hoping that enthusiasm extends to the college level as well.

On Saturday, November 16, the Raptors’ Scotiabank Arena will host the inaugural Hyundai James Naismith Classic. The one-day college-basketball event is a tripleheader that will feature the University of Tennessee vs. The University of Washington, University at Buffalo vs. Harvard University, and St. Bonaventure University vs. Rutgers University.

“There hasn’t been one of these kinds of events in the Toronto market previously,” said Greg Procino, the vice president of basketball operations at the Naismith Memorial Basketball Hall of Fame. “We figured out rather quickly  there was an appetite from the universities to play in Toronto. I would say that was our path to building this event at Scotiabank Arena.”

Ticket prices for the event range as low as $45 Canadian dollars and are as high as CA$250 for courtside seats, said Greg Procino, the vice president of basketball operations at the Naismith Memorial Basketball Hall of Fame. During the Naismith Classic, Scotiabank Arena ticket prices more closely align with the Raptors’ NBA G League affiliate Raptors 905 than the NBA team.

As a nonprofit, the Naismith Memorial Basketball Hall of Fame raises money through three initiatives, said Procino. The first way is allowing walk-up admission at the Hall of Fame, which he estimates attracts upwards of 250,000 people annually. The Hall of Fame also has an active philanthropic department that actively fundraises for it.

Beyond those two methods, the Hall of Fame also raises money through organizing basketball events, said Procino. Every year, it operates roughly eight college basketball tournaments during November and December when the season is in its infancy.

With the Naismith Classic, Procino already thinks that it’s proving to make an impression. Utilizing Scotiabank Arena’s lower-bowl seating, which seats roughly 10,500 fans, he expects a daily crowd of approximately 8,000.

Fans are also being drawn to the universities playing in the Naismith Classic, said Procino. For St. Bonaventure and UB, their campuses are a short drive across the border from Toronto.

Tennessee and Washington are also two of college basketball’s more elite institutions. The former made it to the Final Four of last year’s NCAA Division I Men’s Basketball Tournament, while the latter lost in the Round of 32 to North Carolina.

Having Canadian representation in the Naismith Classic also will help fans feel connected to it, said Procino. While Rutgers saw its lone Canadian and former captain Eugene Omoruyi transfer to Oregon last July, Harvard has three on its roster: guards Luka Sakota and Noah Kirkwood and forward Danilo Djuricic.

“We were driven to Toronto primarily based on the growth of basketball in Canada and the number of universities that are spending time recruiting in Toronto and in that market,” Procino said. “It’s nice to capitalize on the Raptors’ success from last season with their championship – but this event was well in the works before all that happening.”

“We feel like we’re adding to our portfolio,” Procino added. “We’re growing our brand in a new market and taking a college basketball event that hasn’t been in that market before and building from the ground up with universities that are excited to participate.”

For St. Bonaventure Athletic Director Tim Kenney, its place in the inaugural Naismith Classic was a no-brainer. Located in Allegany, New York, the university’s campus is roughly 170 miles south of Toronto.

Playing in an international tournament is not new to the Bonnies’ basketball program, said Kenney. Last season, it got a taste of travel when it played in the Cayman Islands for the 2018 Cayman Islands Classic. But to him, the Naismith Classic has the potential to make an impact for college basketball.

“I see this as being something that’s going to happen annually with the Hall of Fame because I think the success and the interest have been huge,” Kenney said.

The Naismith Classic isn’t the first time that Tennessee has played in a Hall of Fame event, said Associate Head Coach Mike Schwartz. In December 2018, the Volunteers traveled to Phoenix to play No. 1 Gonzaga in the Jerry Colangelo Classic – where they won, 76-73.

After the narrow victory, Schwartz and Tennessee looked back fondly on the Hall of Fame-led tournament. When the hall then approached them about playing in Toronto for the Naismith Classic, their decision was already a foregone conclusion.

“To have that opportunity, we jumped on it and we were very excited about it and we’re appreciative to be a part of the event,” Schwartz said. “But more than anything, it’s just a great event in a great city. In a country like Canada, with basketball, the passion is just incredible and we’re very fortunate to be able to be a part of it and be a small piece of that.”

Recently, college basketball has seen it broaden its international reach. On November 9, Colorado and Arizona State faced off in the fifth-annual Pac-12 China Game in Shanghai. And in 2020, Washington and Tulane will take part.

Len Elmore, the former NBA player and sports broadcaster who currently teaches at Columbia University’s Sports Management Program, says that Canada has become another attractive basketball destination given its history with producing blue-chip talent. In the 2019 NBA Draft alone, six Canadians were drafted, setting the record for a country other than the United States.

Add in the Raptors’ recent championship, and now college basketball programs have more of a reason to associate itself with Canada.

“It’s a great opportunity for colleges to get in the mix,” Elmore said. “The popularity of NBA basketball – colleges can certainly follow. And, from the standpoint of education, competition and the names that are coming out of the game from Canada, it just makes sense to expand the brand.”

If college basketball were to establish itself outside of the U.S., some believe that it should happen organically. Before becoming the first Japanse player to be drafted into the NBA, Wizards Forward Rui Hachimura was playing at Gonzaga under Head Coach Mark Few. With the Bulldogs, Hachimura was able to integrate him as an international college basketball star.

Even if college basketball added more foreign phenoms, the vast majority of the world might still not pay attention, said Eamonn Brennan, a college basketball writer for The Athletic. In the United Kingdom, a college or university-esque lower-level soccer league does not exist – the system is either semi-professionalized or professionalized. In the United States, the attention paid to collegiate athletics is different from most countries and doesn’t necessarily resonate internationally.

With the recent news surrounding player image and likeness and also amateurism, sorting these issues out should be the sport’s primary concerns, said Brennan. If the NCAA wanted to promote college basketball to other parts of the world, additional regular-season tournaments won’t move the needle. Instead, it should prioritize its moneymaker: March Madness.

“I’ve done a couple of radio interviews in Canada in the past around the [NCAA Division I Men’s Basketball Tournament] and that’s a really big event that I think captures a lot of people’s attention,” Brennan said. “I’m not sure that an early-season tournament – of which there are many – just being held in Canada is going to change the world in terms of how college basketball is viewed or perceived overseas.”