Max Kellerman’s nearly five-year long stint on ESPN’s “First Take” may be coming to an end.

The decision is not finalized, said sources, but if Kellerman leaves, Smith is not expected to have a daily debate partner. Instead, he could debate various ESPN personalities as well as high-profile guests.

“It could be Stephen A. vs the World,” said one source.

Even if if Kellerman leaves “First Take,” he’s still expected to play a very prominent role on ESPN. He’s hosted the eponymous “Max Kellerman Show” on ESPN Radio since 2020. He also has his own boxing TV show on ESPN2.

Since then, “First Take” was moved up to ESPN from ESPN2. The king of “embrace debate” shows convincingly trounces Fox’s “Undisputed” in the TV ratings. 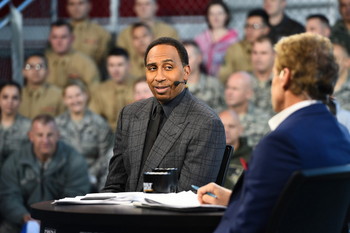 Kellerman, the original host of “Around the Horn,” is a radio veteran. He previously co-hosted the “Max & Marcellus” show with Marcellus Wiley on ESPN in Los Angeles.

Smith and Bayless are still close friends. They’ve made little secret about their desire to work together again one day. But it’s a big question whether ESPN would be willing to pay both millions to reunite on “First Take.”