Greg Norman has mastered the art of the comeback.

Four years after being fired by Fox Sports, the Australian golf legend will serve as lead analyst for SiriusXM’s exclusive audio coverage of the 2021 Masters Tournament.

The 66-year-old Norman will join play-by-play announcer Brian Katrek in the radio booth all four days of the tournament from April 8-11.

Along with Magic Johnson, the chairman and CEO of the Greg Norman Company is one of the world’s most successful athletes-turned-entrepreneurs.

Norman has launched a dozen businesses, ranging from an apparel collection, golf course design firm and restaurant chain to a wine label, a line of meats, and a wakeboard park.

His iconic “Shark” logo (originally designed by Reebok, then sold back to him for a dollar) is one of the most evocative pieces of merchandising for any athlete, anywhere. He boasts an estimated net worth of $400 million.

But Norman’s public persona has been defined as much by his losses and near-misses as his wins. He finished runner-up at the Masters three times, often in heart-breaking fashion, and came in third three other times.

Golf fans will never forget Augusta, Ga., native Larry Mize chipping in to beat Norman in a playoff at the 1987 Masters. Or the Shark blowing a six-shot final-round lead before losing to Nick Faldo in 1996.

In 2016, Fox parted ways with Norman after only a year, letting him take the fall for the network’s bumbling coverage of the 2015 U.S. Open (Fox stopped broadcasting golf in 2020).

Yet every time Norman has been knocked down, he’s found a way to get back up. Despite his tortured history at Augusta, he doesn’t play the sore loser. He takes things in stride, including a serious bout with the coronavirus.

Norman opened up on his return to the Masters, being scapegoated by Fox and his greatest victory (hint: it didn’t come on the golf course). Here are some excerpts with Front Office Sports:

FOS: What’s your take on returning to the Masters?

Norman: Obviously, being back in Augusta is great. Calling Augusta? Even though I’ve never won around there, I’ve come close enough to know exactly what the nuances are. I’ve had enough rounds of golf around there to be able to speak with an authentic voice, I hope.

FOS: This week’s Masters’ won’t have Tiger to attract eyeballs and listeners. Will that hurt audiences?

Norman: I don’t think at all. Obviously, there will be mention of Tiger because he’s history around Augusta. But I think the game of golf — and the Masters — stands head-and-shoulders above any player in the history of the game. And that’s the way it should be.

FOS: So why did Masters TV ratings tank badly in November?

Norman: I think it was probably the date. No question. Augusta looked like a different golf course. It played like a different golf course. It was soft, it was gentle. [Winner Dustin Johnson] shot 20 under par. You don’t see that very often in the history of the Masters. I think you’ll see it back again with the energy. I know the azaleas are blooming beautifully up there.

FOS: Unlike November, there will be fans again. How important are the roar of the crowds both to players and fans watching at home?

Norman: Augusta is the No. 1 tournament in the world where you need to have those roars. As you approach the 11th green, and you play [holes] 12,13,14,15,16, you need that, because it resonates around the entire golf course.

Of all the golf courses I’ve played, even links courses, the noise level does not resonate around all 18 holes…It’s just something that’s so unique to the Masters.

That’s one of the beautiful things I’ll always take away with me is my connection, and relationships, with the patrons and the staff at Augusta National Golf Club. That was my “win” out of all that. Those individuals.

FOS: So what did you take out of your short-lived TV experience with Fox?

Norman: I was very disappointed I didn’t continue on with it, to tell you the truth. On TV, it’s about your connection with the producer: the guy in the truck who’s basically barking orders at you about where you’re going and what you’re doing.

I really enjoyed it…It was just disappointing that I didn’t keep going with it. For Fox to be out of golf is a crying shame. I hope they get back into it.

Because I liked the guys behind the scenes. Even though some of them were sub-contractors and freelance guys, the energy in the compound was incredible. Everybody felt, “OK, Fox is the new kid on the block. We’re going to do something different, unique, we’re not going to be network television. CBS-, NBC-, ABC-style of showing golf, where everybody says the perfect thing all the time. When it shouldn’t be said perfectly.”

Golf needs it, actually. Quite honestly, listening to golf on TV gets rather boring. Because everybody says the same thing every time about everybody. I think you’ve got to be able to say, “Hey, that was the worst shot I’ve ever seen a golf professional hit.” Instead of, “OK, he could have done better.” Kind of like softball commentating. I think that’s the message everybody has been told to say out there. 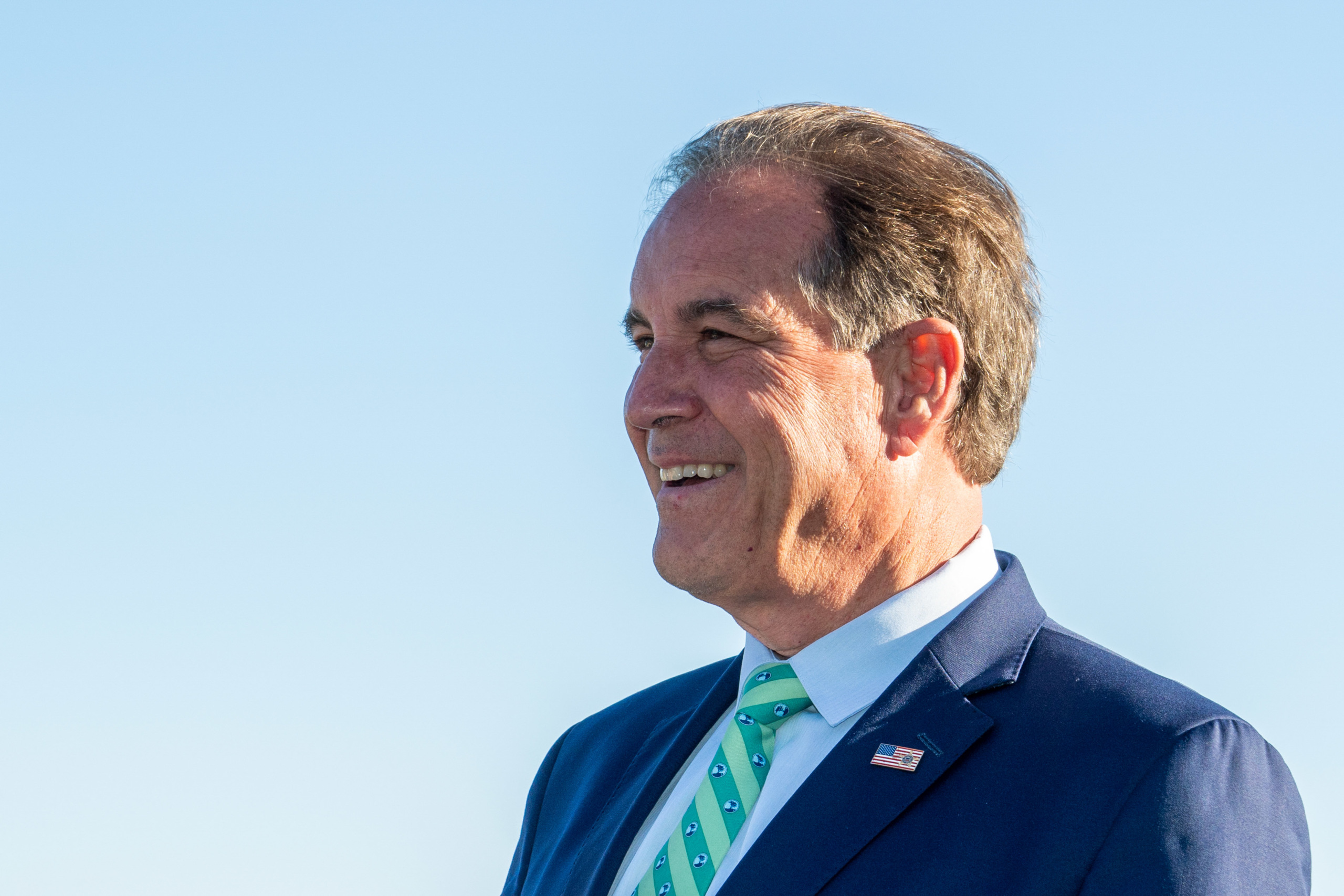 FOS: Fox made lots of rookie mistakes covering the ‘15 Open. But they seemed happy to let you take the fall. Do you think you got a fair shake from Fox?

Norman: No, I did not, to be honest with you. I felt like I got rolled under the bus. I’m not going to mention names or point fingers at other people. But I definitely fairly and squarely got hammered with that. Pretty hard, unfairly.

FOS: You came close so many times at the Masters. You had some horrible breaks. What does it take to win the green jacket?

Norman: You have to have everything come together at the right time. You mentioned it. A guy like Larry Mize chipping in?  You never figure those situations in.

Norman: It’s probably like catching two bolts of lightning in one empty bottle. But what it takes is everything firing at the right time. Your mental side, your physical side. Your body’s ready to go. Where you’re in a very calm place with no white noise around you. And your game is strong.

Your game doesn’t have to be perfect….You just have to be really good, in a good place, with all those ingredients coming together.

FOS: How are you feeling physically?

Norman: I’m 100%. I did have a bout with COVID. It hit me pretty hard. I had an antibody infusion. As soon as I had that, I bounced back. It took me about four weeks before I got back to full strength in the gym, and full strength breathing capacity-wise, working out. It took a while.

FOS: I didn’t realize it hit you that hard?

Norman: Yes, I got it really bad. I actually admitted myself into hospital on Christmas Day. I was in quarantine on my property. I didn’t want to give it to anybody around me. So I drove myself to hospital. It was that bad. I was in that much pain. For me to do that is a big effort.

Norman: I can only speak for myself. I wanted to prepare myself for when I was going to be 55 or 65. When you’re doing well in sport, and you’re one of the top sports men or women in the world, you’re always going to make the bulk of the cash, right?

But that cash disappears very, very quickly. I always looked into the future. I thought I was always very, very fortunate in life to be given a fantastic logo during my relationship with Reebok. That logo now has carried on in perpetuity — forever.

When you looked into the future, there were outflows that were significant. So you really had to prepare yourself into the future about your inflows. To make sure they’re on an annual basis and just getting higher and higher. But I couldn’t have done it, really, if I didn’t have the positioning I had with the brand and my marketing and the opportunities that I could see.

FOS: That’s a great point about your brand. I can’t think of an athlete with a better personal logo.

Norman: It is a sexy logo, I must admit.

FOS: What do you think is your greatest victory? Your two majors?

So my decision not to re-sign with a management company — and take on the role, the responsibilities and the burden of building my own company, creating my own salary and my own office — was the best decision I ever made.

I can tell you the year after I didn’t re-sign, my annual income increased. I  had a great relationship with IMG. There was nothing wrong with it. It was just me. I just personally made the decision that I wanted to build equity into my brand. I looked into the future. In 1993, I wanted to look into, “Where are you going to be in 2025?” I was that far out.