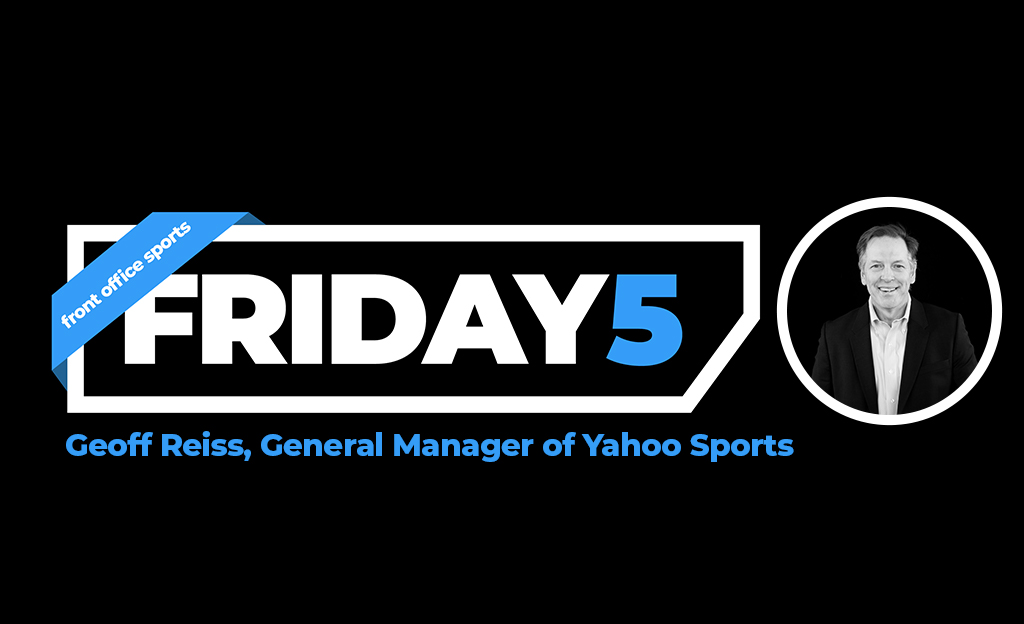 When NFL fans think about how they connect with the league, Geoff Reiss wants Yahoo Sports to be one of the first things to come to their minds.

Reiss, the general manager of Yahoo Sports, helped oversee a banner year for the company in regards to football.

Perhaps most transformative for Yahoo Sports in 2019 was parent-company Verizon expanding its streaming rights agreement with the NFL to allow fans to watch live games within the Yahoo Fantasy Football app this season – including the Super Bowl this Sunday.

That led to a 74% increase in unique viewers on the Yahoo Sports app through week 17, and a 123% increase in average minutes watched on the app.

“Our industry continues to see evolution and growth, and we’re excited to be at the forefront,” said Reiss.

Reiss spoke with Front Office Sports about the evolution of Yahoo Sports, the role sports betting will play in its future, and what’s next for fantasy football.

Front Office Sports: What did you learn from streaming NFL games in the app this season?

Reiss: Do you know the story of Big Buck Chuck? The Kansas City Chiefs fan who left the AFC divisional-round game against the [Tennessee] Titans when the Chiefs were losing, and then became a meme when the Chiefs came back and won? In his video that went viral, he said he was heading out to spark the comeback and was going to watch the rest of the game on the Yahoo Sports app on his phone.

That shows how much of a part of the landscape we’ve already become in terms of how fans think about how they consume the NFL.

The speculation had been if NFL ratings softened, it was because there was a demographic problem. Our products demonstrated that there was a use-case problem, and if football were made available on the audience’s terms, folks would respond and gravitate towards it.

FOS: Yahoo Sports has created a stronghold in fantasy football – how does that translate to sports betting?

Reiss: We do not know yet if those are connected ecosystems as opposed to adjacent ecosystems. We know there is some degree of shared ecosystem there, but we don’t know yet if someone plays our free-to-play, weekly sports prediction contest that they’ll eventually become a depositor.

We’re going to be digging more into that in 2020, and we feel we’re uniquely positioned thanks to the strength of our gaming platform. We want to take the signals fans are giving us – are they playing predictive contests? Would they be interested in going a step further with fantasy? – and see if we can integrate that further. There is going to be a lot of trial and error, but we want to get out ahead of this while this is still on other people’s whiteboards.

FOS: The company is in its 20th year of fantasy football – how do you make sure there that continues to evolve?

Reiss: Season-long fantasy football is a relatively mature product category. There is healthy growth, but at the same time, most of the increase is from share scaling as opposed to the overall growth of the category. It’s incumbent of us to come up with new formats that we think captures the appetite of what fans want.

Ultimately, I think fantasy football players want to get a sense of where their knowledge falls. Will Tom Brady have a good game or bad game? Will the Chiefs do well or poorly? Our job is to record those thoughts and score them in different kinds of ways in different games. We’re deeply invested in continuing to improve the fantasy football product. This year we introduced Best Ball, which is a simplified version that removes week-to-week roster management. We want the fantasy experience to be as accessible as possible.

Reiss: This season, you should have received a notification when one of your players was in the red zone. We’re looking at ways on how we can build on that even further – we feel that was an effective driver of our growth this year.

How can we integrate that further? We want to make sure a fan is on the app on a Sunday because when they have a running back on their team that is inside the 15-yard line, they’re looking at it on the app, and within 15 seconds, they’re watching the game.

FOS: What role does written and video content play in Yahoo Sports’ future?

Reiss: We’re rooted in journalism, and we want to continue to take the next step there. We know more of our talent has to look like our audience and be relatable to our audience. I think we’ve done a terrific job adding diverse voices to our core sports coverage – writers like Liz Loza and Hannah Keyser are two examples of that. We want to continue to make progress in the NFL as well.