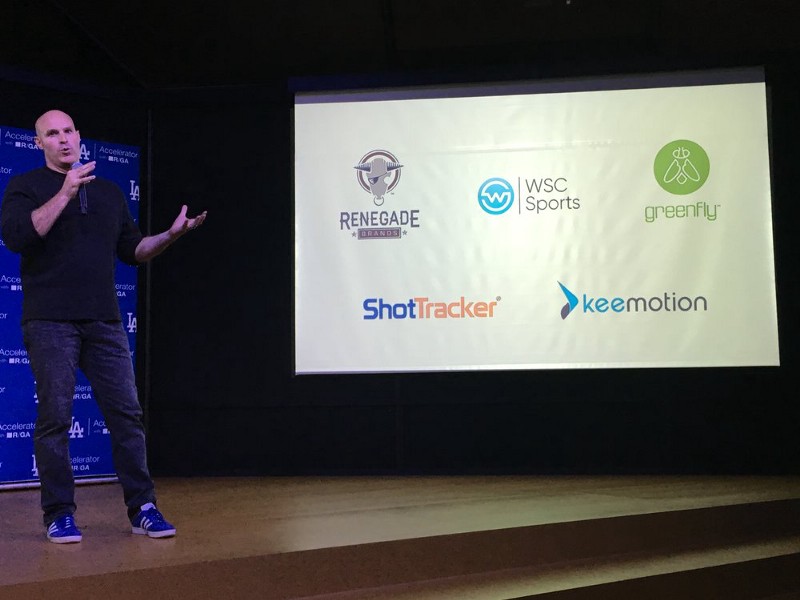 On Thursday night, industry leaders gathered in downtown Los Angeles to witness the unveiling of some of the most promising sports, media and technology startups. The event marked the graduation of the second class of ventures from the LA Dodgers Accelerator with R/GA and featured five companies from across the world.

The event showcased the immense amount of progress and partnerships each startup was able to make over the course of the three-month program. With products ranging from mobile applications to automated production of digital broadcasts to laundry detergent, this year’s cohort featured extremely diverse backgrounds unified by innovation through entrepreneurship.

The LA Dodgers Accelerator with R/GA was founded two years ago as a means for the Dodgers to engage with early stage companies in order to extend their brand beyond the ballpark. They found the ideal partner in R/GA, a full service digital marketing agency, that was also looking to apply technology to the sports industry. With the real-world expertise, brand recognition and fan engagement of the Dodgers and the suite of services and capabilities that R/GA brings to the table, the fit was perfect.

From the beginning, the goal of the program was to be disruptive and find ways to add tangible value.

“We’re not talking about just doing some little project to show we’re innovative and to change the way we’re perceived,” explained Jonathan Bradley, VP and Partner of R/GA Ventures. “This is about creating new business opportunities for these brands that have already conquered the world from a fan standpoint, that are selling out all their tickets and merchandise. It’s about looking at what they’re doing and finding new ways to create revenue streams they didn’t see before.”’

With a strong, clear mission and a synergistic partnership, the program was poised for success from day one. In the first year, the team received hundreds of applicants, ranging from two-person college dorm room startups to full-fledged companies with 40 or more employees. After evaluating the progress and learnings from the initial run, the team ultimately decided to reduce the group to five growth-stage businesses that could take full advantage of the benefits offered in the accelerator.

In the first two years, more than 1,100 applicants have applied to the LA Dodgers Accelerator with R/GA. Applications are accepted between May and June, with the selection taking place in July. Teams begin the program in late August and graduate in mid-November. Teams are offered co-working spaces in Los Angeles, but are not required to spend the three months there. This year, Keemotion Technology, WSC Sports, Renegade Brands, Greenfly and ShotTracker were all selected to participate.

Keemotion is a fully automated content and production solution, connecting coaches, teams and fans with the arena. Keemotion is looking to cater to the on-demand culture prevalent in the sports world today. People want content in the palm of their hands immediately. With Keemotion’s fully automated video production and broadcast technology, they can stream live HD broadcasts instantly, without any human interaction.

Keemotion has created a proprietary software that tracks game action, panning and zooming its integrated camera seamlessly with the flow of a game automatically. The HD cameras capture footage from angles that rival professional productions, at a fraction of the cost. With partners like the Golden State Warriors, ESPN and Villanova basketball, Keemotion is well on their way to their goal of “producing every game out there.”

“In the short term, we want to aggressively expand our U.S. reach into universities and college conferences, as well as build our partnerships with the NBA, ESPN and Fox Sports,” said Milton Lee, CEO of Keemotion Technology. “In the medium term, we are going to branch out into all of the other indoor sports and eventually outdoor sports.”

Renegade attests that odors in sports apparel is a consequence of the cleaning product, not the material. Using a secret formula, their detergents exfoliate stains and sweat beads that are the root cause of stench in clothing. Renegade has earned credibility in the MLB, NHL and NCAA sports world, providing odor spray, laundry detergent and stain removal products to clean some of the filthiest uniforms in all of sports.

WSC Sports has developed a platform that creates personalized sports videos automatically and in real-time, helping sports leagues and broadcasters to engage fans and monetize their content. By using audio and video recognition software, WSC Sports is able to identify and index every play that happens on a court or field automatically.

The technology behind the NBA Finals chatbot, WSC Sports has the capabilities to aggregate content and send customized notifications to fans across sports. Are you a big fan of Steph Curry and James Harden? With WSC Sport’s technology, you can receive custom highlight reels of both players, all on your device of choice, all 100 percent automated.

WSC Sports credits the Dodgers and R/GA for helping build fruitful relationships over the course of the last six months. Today, they are partnered closely with the NBA and have begun discussions with brands such as Nike and Adidas, as well as the MLB and other major U.S. leagues.

Greenfly transforms the relationships of organizations into powerful networks for content creation and distribution. Greenfly is a platform for companies to source quality digital content from fans, employees, celebrities and influencers alike. Greenfly simplifies the sourcing process by taking in standardized, high definition content that can then be curated, refined and published across any channel.

“One of the fun things about our platform is that it’s invisible to the public,” said Daniel Kirschner, CEO and Co-Founder of Greenfly. “They see the results of what we do for our customers, but they don’t actually know the work behind it.”

Contributors use the Greenfly mobile application to record content at the request of brands or teams. The application then works behind the scenes to aggregate the content and allow the organizations to edit it for sharing on social media, television or other online outlets. Imagine if Mario Lopez wanted to share his excitement for the upcoming UFC match or Shaq wanted to talk some trash on Adam Levine’s basketball game during an episode of The Voice. These icons would use the Greenfly app to record their videos and send the product directly to the respective organizations.

ShotTracker with its innovative “ShotTracker TEAM” solution, affordably captures real-time stats for basketball teams, yielding powerful analytics for coaches, players and fans. ShotTracker uses lightweight hardware — including shoe sensors, a custom basketball and permanent court sensors — to produce elite data for teams. And at a price tag starting at just $2,500 for installation, ShotTracker has the capability to scale to any level of the game.

With the integration of all of this technology, teams can collect and analyze valuable data automatically in real-time, something that is tedious and manual today. With ringing endorsements from basketball legends such as Tom Izzo, John Calipari and Bill Self, along with a recent funding round from investors such as Magic Johnson and former NBA commissioner David Stern, ShotTracker is in position to revolutionize basketball analytics.

“ShotTracker is to gyms as WiFi is to coffee shops,” said Davyeon Ross, Co-Founder and COO of ShotTracker.

Overall, the demo event was a celebration filled with excitement and optimism for the future of these incredible companies and sports technology holistically. Each and every team was able to make significant strides in growing their business through new partnerships, refined strategy and marketing plans and, for some, raised capital. Renegade Brands, Greenfly and ShotTracker all recently announced additional funding rounds, each upwards of $5 million.

For companies interested in pursuing the accelerator in future years, LA Dodgers CFO Tucker Kain had the following insights for prospective applicants:

“We talk a lot about clarity of problem solving. What problem are you solving, who’s your customer and what does that mean for that customer? And then how can the Dodgers brand and broader network help accelerate that vision? It’s all about having the right target, fit and opportunity, as well as an ability to articulate that clearly and concisely.”

When reflecting on their experience in the accelerator, each company had a unique method to making the most out of the three months with the Dodgers and R/GA. Some elected to spend the entire duration in Los Angeles while others traveled to the west coast occasionally, while maintaining a majority of their operations in their home base. Milton Lee and Keemotion, took the most interesting approach.

“We hired a consultant to be our accelerator liaison,” Lee described. “Make sure you have someone focused on the experience, that can give it the appropriate amount of time and review. You’re not going to get everything that they have to offer out of it, unless there’s someone dedicated to doing the entire program. For me, it was cost well spent.”

Davyeon Ross added his perspective on getting the most out of the program.

“Stay really engaged. When you engage, a lot of good collisions happen. Be aggressive and don’t be afraid to ask questions. They are here to help you and they want to help you. Closed mouths don’t get fed. What we have seen is that, when we ask, they always find a way to deliver. That’s what’s great about these folks.”

Perhaps the most intriguing collision is the collaboration developed between WSC Sports, Keemotion and ShotTracker in conjunction with Fox Sports and Intel. Together, these teams will leverage all of their core functionalities to produce NAIA basketball games with little to no human interaction. Using ShotTracker’s robust data analytics systems, Keemotion’s autonomous video capture and WSC Sports’ automated play indexing; games will be professionally broadcasted with live stats and instant highlights, all without any human intervention.

The first cohort from the Dodgers Accelerator with R/GA have gone on to collectively raise more than $21 million in funding and receive various other accolades. The stage is certainly set for this year’s group to continue the incredible track record of success the program has fostered. The future is bright for the Dodgers, R/GA, and the accelerator alumni.