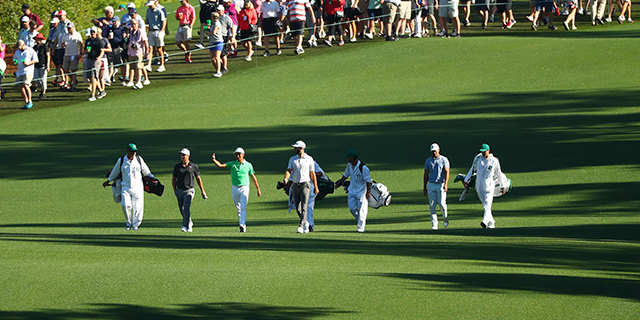 Golf is one of the few sports fans are as passionate about playing as they are watching. With that knowledge in mind, Barstool Sports is launching the Barstool Classic, an amateur golf tour with $10,000 on the line. The multi-month event will have eight qualifying tournaments culminating in a championship tournament.

“Anyone who is a big fan, they typically play golf, and they ultimately want to play for something,” Bozoian said. “When I’m at the practice green watching 10-foot putts, I can’t envision I’m winning the Master’s, but luckily we have the resources to do this so we can play for something that matters comparable to what I’m watching.”

READ MORE: How The 2019 Masters Revived ‘The Tiger Effect’

Bozoian went to Barstool CEO Erika Nardini to pitch the event series shortly after coming up with the idea two months ago. The tour was pulled together quickly and announced with six of the nine courses booked. The speed to market is in line with many of the other ideas Barstool has started to execute, Nardini said.

“We do everything quickly,” Nardini said. “Golf is appealing because we love golf, and we have young fans who love golf the way we do. We try to have fun with everything we do and to approach stuff in a way that’s easy-going and approachable. The Barstool Classic is a great example of that.”

The Barstool Classic is the most recent example of the company stepping outside the box with auxiliary events to supplement the core media offerings. In the recent past, Barstool has held live shows plus started a punk rock band and amateur boxing circuit. Nardini said the brand will also release a comedy special in May. There’s no telling what might come next from Barstool.

“I’m not sure exactly what you’ll see from us in the future, but I guarantee it will be funny, sometimes unexpected and decidedly authentic,” she said.

Nardini also didn’t explicitly say the events are meant to generate new revenue but noted she hopes brand partners see value, while “everyone who plays in the Barstool Classic has an absolute blast and we capture some funny moments.”

Web Smith, the founder of 2PM Inc., believes the event’s greatest purpose may not be the revenue it draws but what it can do for Barstool Gold, the company’s premium subscription service. Barstool Classic registration opened to Barstool Gold members on Wednesday, 24 hours ahead of Thursday’s opening to the general public.

“This is just the latest piece of the puzzle,” Smith said. “I wouldn’t categorize it purely in the event space of attracting people to a physical location, but it feels it’s adding value to the gold membership. It gives some incentive to have that membership to sign up early. Not to mention this is another event where they sell lots of merchandise and offer another platform for their sponsors.”

The eight qualifying tournaments will be held in Connecticut, Chicago, Washington, D.C., Philadelphia and the greater Boston and New York areas. Bozoian said the first year will be small to ensure it’s the best-possible event before potentially expanding in a wider geographic footprint next year.

“We’re pretty much hitting the major Barstool markets that have had hubs for nearly a decade or more,” Bozoian said. “We’ve already received a lot of why not a ‘West Coast event? South? Texas?’ The answer is we’ve never put on a golf event and we’d rather do it well, make sure we fill it out and provide the most enthusiasm we can and knock it out of the park.

“We don’t want to get ahead of ourselves, but my vision is more stops, more cities and more dates.”

Each of the eight qualifying events will be open to 54 teams of two, who will play the course with a shotgun start to ensure the players can enjoy a happy hour and full dinner following the round. A few spots will be reserved for “celebrity fans,” Bozoian said, to add “some clout.” Barstool will also focus on providing fans the ability to interact with staffers.

The top six teams from each course will move on to the finale with the $10,000 on the line. Bozoian said he worked with the U.S. Golf Association to ensure those who wish to keep amateur status will be able to waive the prize.

Whether or not the Barstool Classic succeeds in the company’s desired mission is yet to be determined. But Barstool appears intent on maintaining a presence in the events space.