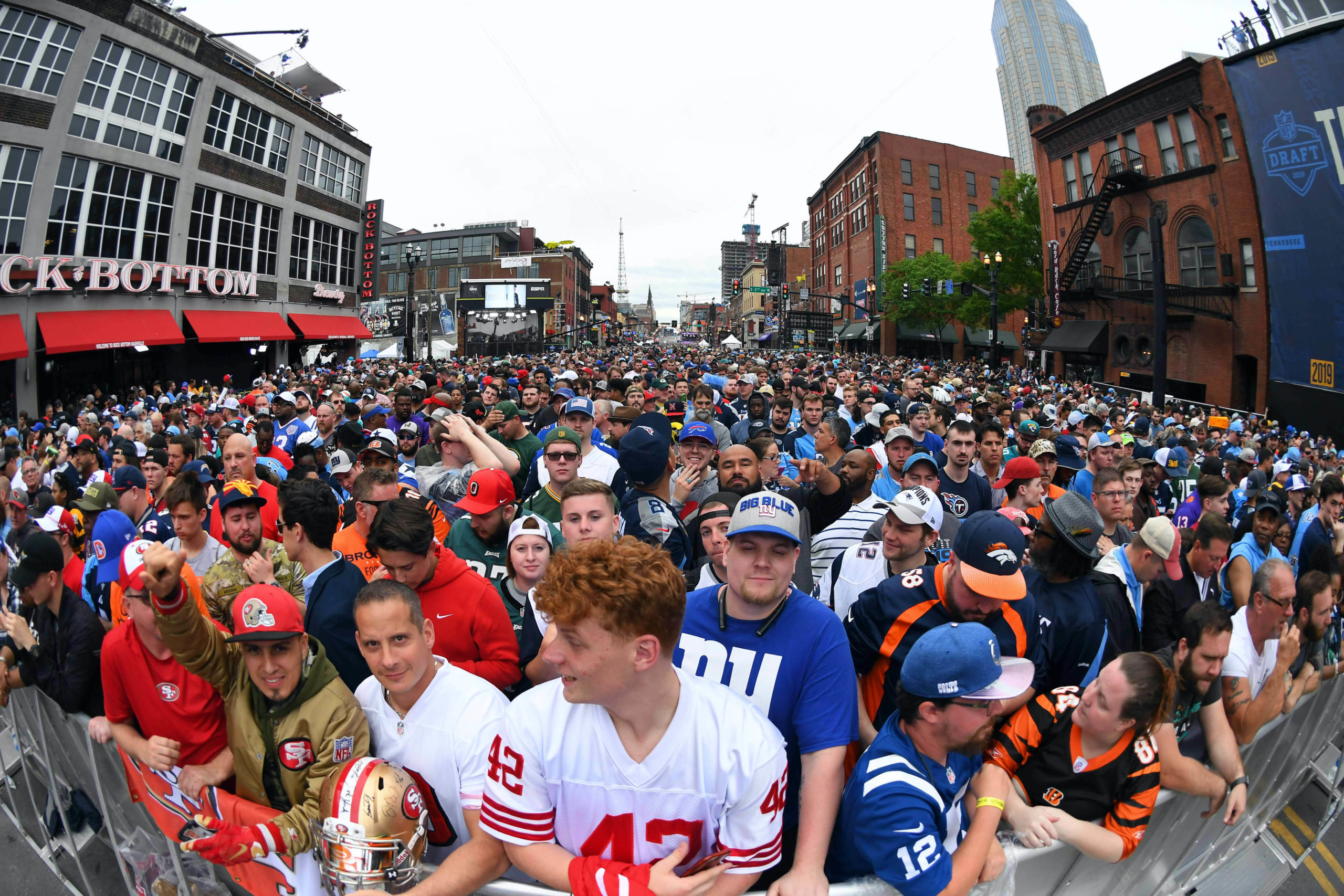 As one of the few live sporting events during the coronavirus pandemic for marketers to reach consumers, the NFL and Disney’s ESPN and ABC networks have successfully turned the virtual NFL Draft into a major advertising event, according to media buyers and brands.

“The NFL has done a lot in the last couple of years to make the draft a very big event. They partnered with NFL sponsors, but they’ve also opened it up [to other brands],” Gibbs Haljun, total investment lead for Mindshare, a subsidiary of WPP Group’s GroupM, said. “It’s an opportunity to be a part of something bigger for a lot of clients versus traditional NFL game sponsorships.”

Advertising space during the first three rounds of the NFL Draft, to be televised on ESPN, ABC, and the league’s own NFL Network, are sold out, James Minnich, Disney’s vice president of sales, said.

“We’ve seen, frankly, more demand than we have availability due to the pause in live sports,” Minnich said. “I think there’s a certain level of demand also because of the type of draft prospects that are in the NFL Draft this year.”

Minnich would not comment on sales prices, but at one point, ad slots for round one of the NFL Draft were selling for around $250,000 per 30-second commercial, according to Adam Schwartz, senior vice president and director of sports video investments for Horizon Media.

“Most [day one] spots were sold well in advance,” Schwartz said.

Disney’s advertising sales team has reported double-digit growth in year-over-year revenue in the 2020 NFL Draft, including a surge from the computers, insurance, gardening, and media categories, the company said.

More than 100 companies will advertise during this year’s draft coverage. Roughly 60% will be advertising for the first time. NFL partner Lowe’s will serve as presenting sponsor of the ESPN and NFL Network telecasts, according to Disney. Verizon will sponsor the “Prospect Cam,” Pizza Hut will sponsor the “Draft Moment” and Bud Light Seltzer will sponsor the “Virtual” huddle.

Lowe’s was already planning on advertising during the NFL Draft this year. But when ESPN came calling with an offer to become the presenting sponsor of the event, the company jumped at the opportunity.

“When the business landscape changed [due to coronavirus], ESPN lost its original presenting sponsor and approached us,” Marisa Thalberg, Lowe’s chief marketing officer, said. “We said yes. As people are pulling out, we will lean in even more.”

The official home improvement sponsor of the NFL will also run three ads during the draft celebrating its workers on the front lines. In addition, the company collaborated with top quarterback prospects Joe Burrow and Tua Tagovailoa, as well as Carolina Panthers running back Christian McCaffrey to capture video content for Instagram thanking workers in their hometowns. Burrow posted his 60-second spot on his personal Instagram on April 21.

“It became clear that the best story for us to tell was who we are as a brand and a company,” Thalberg said. “Lowe’s is the intersection of homes, community, and people, especially during times of crisis. Not just this pandemic, but tornadoes and hurricanes.”

Other NFL sponsors committed to advertising during the makeshift virtual draft event are Bose and Pizza Hut.

In addition to sponsoring the “Draft Moment,” Pizza Hut will roll out a new “Proud to Serve” ad during all three nights of the NFL Draft. The commercial, created with ad agency GSD&M, will similarly commend Pizza Hut employees on continuing to fill orders during the coronavirus pandemic. The Yum Brands subsidiary additionally expects to deliver food to more than 50 draft prospects during the event.

“This year’s NFL Draft is certainly unprecedented,” the company said. “While there will be no on-site activations like previous years, the virtual format allows us to get our food directly into the hands of prospects across the country.”

Meanwhile, Bose will once again give fans inside access to draft prospects’ preparation in the lead up to the draft. More than 40 players will promote sponsored draft week experiences on social media and across outlets such as Barstool Sports, Bleacher Report, and ESPN.

Players will also don Bose noise-canceling headphones when they receive their call from an NFL franchise, according to the company. Bose is one of 50 official sponsors whose products are allowed on screen with a newly drafted player.

“We quickly pivoted away from highlighting many special moments at one singular place in Las Vegas to doing so across dozens of locations,” Pat LaCroix, head of media and partnerships at Bose, said. “We’re taking this challenge head-on, using Bose products and technology to keep all NFL teams, leadership, and prospective players connected.”

Interest remains high from marketers. But some brands have chosen to sit out this edition of the NFL Draft. Oakley, the manufacturer of sports performance equipment and an NFL sponsor since 2019, is just one example of this trend.

The company, which also sponsors Kansas City Chiefs quarterback Patrick Mahomes, said it was set to activate during the 2020 NFL Draft had the event still taken place live in Las Vegas.

“Due to the unprecedented times, we have shifted our plans to focus on the months leading up to the 2020 season,” Justin Andrews, senior vice president of Oakley North America, said. “We are thrilled to be an official on-field partner of the NFL and support the range of league events that happen throughout the year.”

John Tatum, CEO of Dallas-based marketing agency Genesco Sports Enterprises, believes that even if brands do not advertise during the event, failure to participate in some capacity is a missed opportunity.

Company client Anheuser Busch is participating in the NFL Draft-A-Thon through its Bud Light Seltzer brand. The company will donate $1 for every video posted by fans booing Commissioner Roger Goodell  – up to half a million dollars – to the NFL initiative intended to raise funds for COVID-19 relief.

“Brands should absolutely participate in the NFL Draft, whether it’s advertising, charity or community based or giving consumers some levity,” Tatum said. “I think it’s a missed opportunity to not participate somehow.”

GSE’s other clients, including 7-Eleven and supermarket chain Safeway, will activate on a local level with the Washington Redskins and Los Angeles Rams, respectively, Tatum said.

In order to generate the most buzz around the NFL Draft, the league is again working with Twitter. The companies partnered to create Super Bowl confetti tweets of players and fans in February – some in real-time while the game’s outcome was still in the balance.

Twitter is set to post highlight clips from the draft for fans on its platform, including player reactions, analysis, and commentary. The company will also air a 30-minute live pre-draft show at 6:45 p.m. opening night of the tentpole event that examines mock drafts and prospects’ preparations at home.

“Prior to the WNBA Draft, we hadn’t had a live sporting event in almost five weeks,” Christine Wixted, sports partnerships manager at Twitter, said. “I think a lot of eyeballs are going to be on the content, just given the virtual aspect and the kind of the situation and circumstances that we’re in.”

Twitter is accustomed to being on-site at NFL Drafts interacting with fans and helping brands activate during the event, Wixted said. The company’s partnership with the NFL enables it to integrate brands into its live show or ads on top of highlight packages. Interest has picked up from marketers as more live events have returned.

“I think we had to toe the line kind of early on when the pandemic first set in. We wanted to be respectful of their messaging at that time,” she said. “Brands are a little bit more hungry to get around these types of events when they do happen since they’re not coming around so often as they normally would with your traditional sports calendar.”